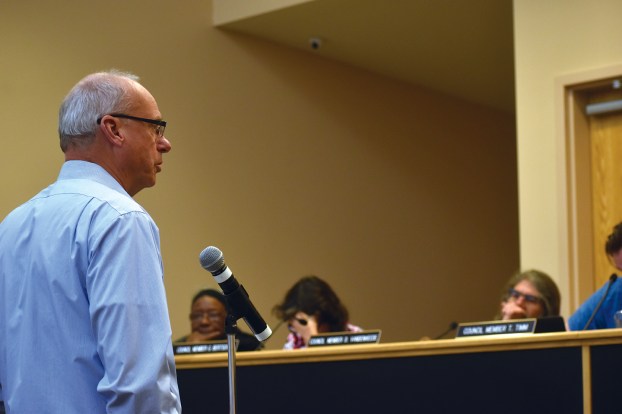 The council unanimously approved primary cable, primary wire and load break elbow installation from Power Line Supply, of Reed City, Michigan, for $13,241. Members also approved an emergency expenditure of $6,536 to Herrman and Goetz, of South Bend, to work on a substation on Niles’ south side.

Other utility items approved were $3,224 in government funds to replace to make electrical and heating replacements on a Seventh Street home and an agreement with USIC Locating Services, of Indianapolis, and the utility department to take proactive measures against utility line damage.

Outside its list of bills, the council’s largest item unanimously approved was $40,755 from Payne Tree Service, of Niles, to remove trees and stumps deemed dead, dying or dangerous. The removal is done annually.

The unanimous decision that received the most outward audience approval was a two percent pay raise for City Administrator Ric Huff. He also received a one-time $1,000 bonus “for being awesome,” as Mayor Nick Shelton said.

The crowd applauded twice, once after Huff’s increase was approved and again after he spoke.

“I would like to affirm that the only reason we make things happen is all of our staff,” he said. “We really appreciate the support and all that they do.”

After Councilmember William Weimer motioned for adjournment, a committee of the whole meeting followed. No city council action is taken at these meetings, but issues are discussed and, in the case of the Oct. 28 meeting, direction is given to city staff.

Huff stepped up to the microphone in front of the council and first shared the idea of creating a designated public meeting space for city meetings, from Niles City Council to Niles Main Street. It was a pitch he made four years ago, he said.

The meeting space would be on the first floor of city hall, where he said an approximately $20,000 renovation could turn little-used seating space into a place for meetings.

This in turn, causes meetings to be shifted to other spaces, a move that prospective attendees or even committee members themselves may not know about until the time of the meeting.

The cost, Huff said, would come from the utility budget, and restrooms would be made available.

Many council members said they would be interested in hearing more information and seeing quotes.

“I think that the fact that you’re bringing it back here four years later shows that, obviously, it’s still a problem and a priority for you,” said councilmember Daniel VandenHeede.

Huff also offered two options for marijuana license approvals that city staff would take on when considering which marijuana entrepreneurs would be recommended for designated consumption centers and microbusinesses, of which only three and four licenses can be given by city limits, respectively. Only four provisioning center licenses can be given, too, but all four have been given to medical marijuana businesses already.

The council asked Huff and the city to create a rubric and scoring guide of the 10 criteria that a marijuana business applicant must meet to be considered, per an adult-use marijuana ordinance approved this month. They also asked that the city create limited time periods where prospective marijuana businesses could apply for limited licenses.

The scores would be sent to the council as it considers whether to approve the licenses.

“The baseline, ‘Are they qualified or not qualified?’ I think that’s an easy decision,” said councilmember John DiCostanzo. “I think when we get to who’s more qualified, that’s the difficult evaluation to make.”

Huff and the council often discussed the need to be objective in grading and scoring businesses for a limited number of licenses available. Criteria such as “integrity” and “moral character,” which are stated in the ordinance, were subjective, some said.

The administrator also noted that city staff did not have the capacity to log into hundreds of hours considering businesses.

Marijuana business license types with no number of limitations, such as marijuana transportation and growing, will not be scored but will be checked to see if they comply with ordinance criteria.

By SARAH CULTON sarah.culton@leaderpub.com DOWAGIAC — Aside from a few stray bookcases and stools, a large, red storefront on Division... read more