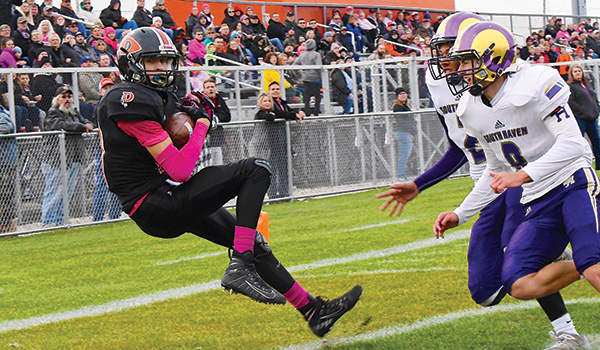 Chieftains qualify for playoffs with 36-0 win

DOWAGIAC — At this same time last year, the Dowagiac football team had no chance to qualify for the postseason.

When the team stepped off the field after its final game last year against Paw Paw, resulting in a loss, D.J. Lanier, then a junior, ran through his head over and over again what could have been.

This season, the seniors huddled for a photo with smiles and some tears after their 36-0 victory over South Haven. The victory made their final walk off Chris Taylor Alumni field slightly less real, as a future of playoff games awaited them outside the gates.

“Last year, we didn’t get to do that for our seniors,” he said. “For the juniors, sophomores and even freshman on the team to help us out and go to the playoffs, it feels great.”

While underclassmen did take the field in the second half of the game, the first half was the seniors’ time to shine, as Alex McIntosh intercepted a pass in the first minute and a half of play and returned it for a 28-yard touchdown. McIntosh also caught a 30-yard touchdown pass from Cailyn Murphy four minutes later.

Lanier was next to score for the Chieftains on a five-yard run with four minutes remaining in the opening quarter.

De’Ondray Henry added a 14-yard touchdown run for Dowagiac, which took a 22-0 lead the second quarter.

In the second half, Brooks replaced Murphy as quarterback and freshman Malakai Haines dominated the running game.

The last touchdown for Dowagiac came from Lanier, who ran for 67 yards to score in the third quarter.

Lanier, walking away with two touchdowns, remembered what it felt like to have last year’s playoff hopes slip away.

“I can’t even explain it,” he said. “I had mixed feelings. I blamed myself at times because I feel like I didn’t do what I was capable of doing last year. Like I didn’t really step up like I was supposed to.”

As Lanier stood on the field, Murphy approached him with tears in his eyes as both seniors agreed that the chemistry this year is different.

Head coach Randy Brooks, who is in his first year of coaching the Chieftains, could possibly have something to do with that.

“He’s a great guy,” Murphy said. “Not only does he help us on the field, but he helps us in all aspects of life, not just football. It’s more than football to him.”

Lanier agrees, adding the team is a family and uses his own friendship with Murphy as an example.

Lanier, who was first introduced to football in middle school, said he had not considered himself to be a football player until he played in high school,  thanks to Murphy.

“Murphy got me onto this, and I’m starting to love it,” Lanier said. “I’m having mixed emotions. I don’t know what I want to do after this.”

With playoffs becoming the view, the team is in agreement that it will focus on what coach Brooks calls “playing proper.”

And as some Chieftains walked off the field, their last steps on Chris Taylor Field, they said it had not yet felt real.

“I’m emotional, but I’m holding it in right now,” Brooks said. “It’s going to be like later on when I cry.”

Going to the playoffs has been a dream for much of the senior class since they were little, Henry said

“We are all close, all family, all brothers — since day one. There’s nothing else to it,” he said as he walked off the field.

The Michigan High School Athletic Association announced its playoff pairings at 7 p.m. on Sunday. The pairings will be posted online at leaderpub.com.

Read about the coach’s reactions to their pairings in Tuesday’s Dowagiac Daily News, as well as kickoff times for the games.

ST. JOSEPH — Talk about a rebound. After a disappointing sweep by South Haven in its Wolverine Conference finale on... read more