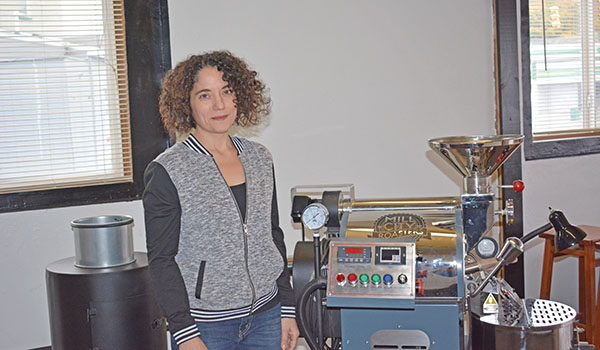 DOWAGIAC — Aside from a few stray bookcases and stools, a large, red storefront on Division Street in Dowagiac sits mostly empty, sounds echoing off its bare walls.

However, when Cassopolis’ Kristy Kambanis looks at the space, she sees opportunity. By next year, she hopes to see fully stocked shelves lining the walls, hear live music dancing through the space and smell freshly roasted coffee wafting through the air.

Kambanis is looking to open Beeswax Coffee at 104 E. Division Street, Dowagiac, in 2020. The space will serve as a coffee roastery, where she will sell coffee beans that are roasted on-site, in addition to honey, which she harvests herself.

“It is sort of like two loves coming together in the name, with the bees and the honey and the coffee,” Kambanis said, her hands curved around a freshly brewed mug of Americano.

Beeswax Coffee’s roasting will take place inside of a silver roaster located on one side of the building. Kambanis will put green coffee beans, which is how they look when they are harvested, in the roaster, and it will roast the beans until their oils are extracted, and they turn a recognizable glossy brown. The beans are then ready to be ground and brewed.

During the year, Kambanis will strive to carry a variety of roasts to suit many different palettes. Still, she said that because coffee is an agricultural product, some roasts will be seasonal. While this may be a different process than picking up coffee from the grocery store, Kambanis said locally roasted coffee makes for a special cup.

“I think there is something to the idea of knowing who roasted your coffee and where it’s coming from,” she said. “Outside of Hawaii, you can’t grow coffee in the United States due to climate, so roasting it can be a way to make it local.”

Kambanis has loved coffee for most of her life. Her love even goes back to her youth — before she was able to truly appreciate the taste of coffee. Back then, she would eat vanilla ice cream with coffee, which she later learned is an Italian dessert called affogato.

“Coffee has always had a nostalgic feeling for me. My mom drank it, and it’s one of those things that you grow into,” she said. “It’s almost like soup in the way that it is comforting. You sit down with a coffee or a tea and just take time out for yourself.”

Now, Kambanis is excited to see her love of coffee come alive in downtown Dowagiac. Originally from the suburbs of Chicago, Kambanis has been living in Cassopolis since 2004. For a while, she said she has been looking at opening up her business in either Cassopolis or Dowagiac. When the Division Street location became available, she knew it was the right fit.

“This opportunity came at the right time,” she said. “Dowagiac is doing a great job at fostering its new businesses, and I really want to be a part of the community and partner with other local
businesses.”

Once Beeswax Coffee finds its footing, Kambanis wants to do more in the space than just roast coffee beans. Ultimately, she would like to host “cuppings” — in the same vein as wine or beer tastings — so that customers can try out different roasts and find a specific type of coffee that will suit their tastes. Additionally, she would like to see a part of her space used to be a music venue where local bands can play shows.

“Those things will come later,” Kambanis said. “I don’t want to put a timeline on that. Instead, it will happen more naturally.”

As she continues to prepare Beeswax Coffee for opening, Kambanis said she gets more excited by the day, and she hopes the community will embrace the roastery.

“This is something I’m just so excited about,” she said. “I can’t wait to roast a batch and see it out there.”