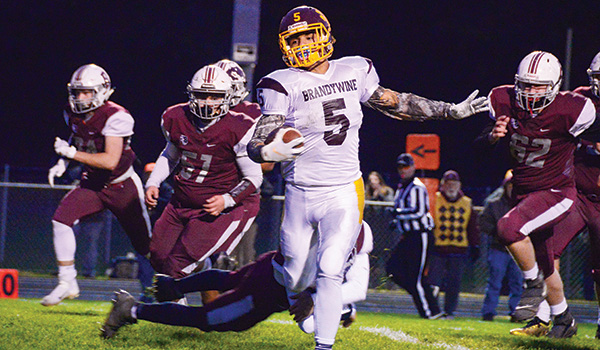 Jordan Abrams scores one of his five touchdowns for Brandywine in the Bobcats’ 52-38 win over the Bucks Friday night. (Leader photo/ERIKA PICKLES)

NILES — Since Brandywine’s football program was formed in 1961, only two teams have celebrated undefeated regular seasons.

The first came in 1995 when the Bobcats went 9-0. That team lost the first playoff game, which abruptly ended its season.

The second came on Friday night, when Brandywine defeated Buchanan 52-38 in the final regular-season game of the year. The win advances the Bobcats to playoff action, which begins this weekend.

The Bucks ended the season 3-6, but put on its best performance of the year.

“This whole season came together tonight,” said first-year Buchanan coach Mark Frey. “Unfortunately, it fell short for us, but to play the way we did against a state-ranked team — I could not have asked for anything better. Tonight, we played that complete game we had been looking for all season, and I am more than proud of our team.”

Buchanan trailed the entire game, but came within one touchdown of Brandywine in the fourth. A 42-yard run from Johnny Rager brought fans and players to their feet with a 45-38 score. But the Bobcats’ all-time leading rusher, Jordan Abrams, scored his fifth and final touchdown with just under one-minute left from five-yards out to guarantee his team the win.

Abrams ended the night with 285 of Brandywine’s 394 rushing yards. Shane Brown and Gabe Gouin were the other two scorers for the Bobcats.

Bobcat head coach Mike Nate quickly made his way off the field after the victory, as he suffered a large gash on his forehead after being hit by Abrams in the third quarter. Nate was in high spirits, despite a possible concussion and the need for several stitches.

“I can’t feel much pain right now because I am so happy with the entire effort of our team and this win,” he said. “Being 9-0 is a great feeling. I’ll let this all sink in a little more when I get to the hospital.”

Brandywine chants echoed onto the field as Buchanan’s team huddled for an emotional send-off. Frey expressed his overall satisfaction with his team’s improvements this season and gave acknowledgment to the 13 seniors who ended their high school careers.

“What a fabulous group of seniors,” Frey said. “I just came to this program in June, started from scratch and those were the guys who accepted the change. They never fought anything we did. They showed up every morning for weight training. They stayed positive during practices. I am excited to see the direction this program is going, and I am grateful those guys helped make this year’s transition an easy and smooth one. They really set the tone for future players.”