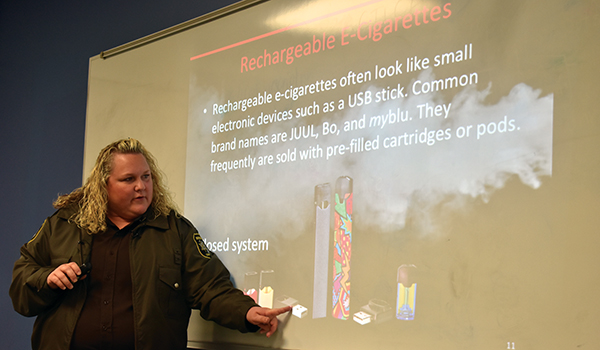 Organizer Kelly Laesch, a Berrien County deputy, informed her audience — composed largely of administration from Niles, Brandywine and Buchanan schools — about the e-cigarette industry, the ways its products are used and the industry’s impact on youth.

The goal, Laesch said, was to help adults identify youth who use e-cigarettes, known as vaping, and be able to correctly address the issue.

According to state law, minors under 18 are not allowed to possess e-cigarettes, whether they contain nicotine, THC or flavoring and aerosol only. No one can vape on school property, including athletic facilities and parking lots, regardless of age.

The meeting came a week after a Michigan judge overturned Governor Gretchen Whitmer’s state ban on flavored e-cigarettes in September. It also comes at a time when hundreds of people have been allegedly hospitalized because of vaping.

“Are they safe? I would say not,” Laesch said. “They haven’t really been around long enough for us to know what the effects are.”

Laesch, a crime prevention deputy, formerly worked in narcotics, road and jail departments of law enforcement. She said she started seeing e-cigarette use on peoples’ records, prompting her to research the product, then share that information across the county.

She spent much of the session guiding audience members through the different types of e-cigarette products, each often with its own appearance and means of heating liquids to produce aerosol. Many contain nicotine, hard metals, vitamins and other chemicals.

Some are shaped like pens. Others can be plugged into USB ports, making them look like phone chargers. Still others are small and take the shape of rings and guitar picks.

According to statistics provided by Laesch in her presentation, many children nationwide prefer flavored e-cigarette liquids, from mint to mango, over non-flavored products. When exhaled, e-cigarettes will produce a small puff of aerosol that quickly dissipates and leaves no smell.

E-cigarette’s doppelganger designs make identifying one difficult, Laesch said. It was one reason why she hosted the session. Many parents and teachers do not realize a student is vaping, she said.

The designs also pose another problem, Laesch said. They directly appeal to children and young adults. Flashy artwork, hip advertising, flavor varieties and easy concealability are all targeted to youth over adults using the product to get off a cigarette addiction.

That can lead to adverse health effects.

“Nicotine at a young age affects the growing brain of a teenager,” she said. “When you take in nicotine or a substance that has nicotine, it goes to your brain. It hits the dopamine. It makes it exciting at the time. It makes you want more.”

She also said that using products with nicotine can make children more susceptible to addiction as adults.

She noted that e-cigarettes often have high concentrations of nicotine. While a single cigarette burns out after a few puffs, an e-cigarette could be the equivalent of multiple packs of cigarettes that does not provide an indicator of how much nicotine a person intakes.

Then, there are social ramifications. In school, students could be punished. If their products illegally contain THC, they could be charged as minors in possession.

“I’m hearing it all across the board — Cass County, Van Buren County. Kids are getting caught with vape and vape with THC — marijuana — and they are getting removed from sports,” Laesch said. “They are losing a lot of opportunities for scholarships.”

Niles Superintendent Dan Applegate, who opened and closed the session, said vaping was an issue that extended past one school district, meaning that the need to educate and minimize vaping among youth was a community effort.

That identity, he said, should not be based on the flashy products, fruity flavors or youthful commercials of the e-cigarette industry.

NILES CHARTER TOWNSHIP — The Rebecca Dewey Chapter of National Society of the Daughters of the American Revolution, or DAR,... read more