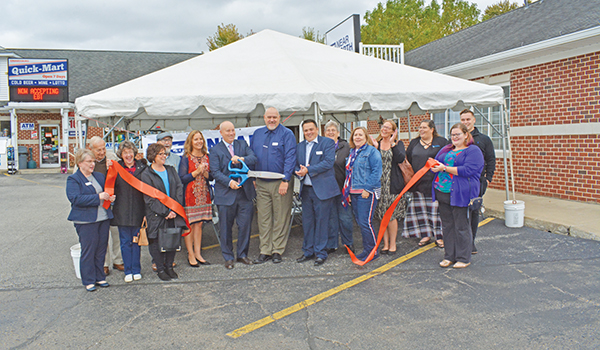 “We have two successful offices in Granger and in Elkhart to supplement the 18 we have in the Midwest,” said CEO Dan Fowler. “We had a lot of client demand across the border to service more clients. It was a very convenient location.”

So far, Near North Title representatives said both the community and clients have embraced the new Edwardsburg location.

“People want us to be here,” said Ray Summeier, senior vice president. “This is hopefully the first of many in Michigan.”

In addition to being the first Michigan location, the Edwardsburg opening was all the more exciting as Fowler has ties to the area, he said. Though he currently lives in Carmel, Indiana, his father and niece both attended Edwardsburg Public Schools, and he himself grew up down the road in Elkhart.

“This is a local spot for me,” Fowler said. “We are excited to be here.”

Also excited for Near North Title Group’s opening is the Edwardsburg Chamber of Commerce. Director Roy Smothermon said he believes that the title insurance agency will prove to be an asset to the Edwardsburg business community and will help to continue the area’s economic growth.

“We are happy about any new business, but we are excited about [Near North Title Group] because they have branches in several areas, and this is the first one they have in Michigan,” Smothermon said. “We are really excited that they chose Edwardsburg to be a part of their new expansion. They will be a great addition to our community.”

As Near North Title Group continues to operate in Edwardsburg, its staff said it hopes to become an active member of the community. Fowler said the company plans to give back to the community through NNTGiving, its charitable program that last year donated $45,000 to nonprofit organizations.

“We knew we were going to do great here, but we definitely want to be part of the local fabric of the community,” Fowler said. “We want to make sure that we are giving back and are a good steward of the community with our time, our talent and our treasure.”

CASSOPOLIS — A regional credit union is getting a more Cass County-inclusive makeover, thanks to a recent name change and... read more