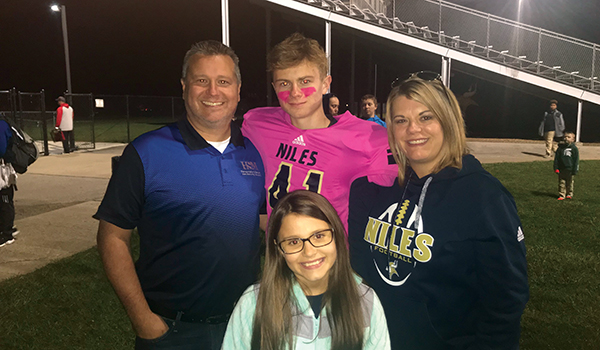 Tracey, left, Mason, back center, Mehgan, front center, and Cathie Waggoner, right, pose for a picture after a Niles football game where members wore pink jerseys to support breast cancer patients and survivors. Cathie was later diagnosed with the disease, but thanks to a mammogram, it was easily removed. She began planning to host an educational event shortly after. (Submitted photo)

Thumbing through her phone, she locates a photo of herself and her son, Mason, after his Niles High School football game two years ago. Like his teammates, Mason was wearing a pink jersey to show support for breast cancer patients and survivors.

“You never know what this picture’s going to mean,” Waggoner said.

On Aug. 8, Waggoner received a mammogram and found out she had Stage Zero breast cancer. She said she had not heard of such a stage before.

The diseased spot was 0.5 millimeters, or the size of a lowercase “i” dot. The mammogram had found the cancer before it became health-threatening.

That evening, she met up with friends at The Brass Eye bar in downtown Niles and began brainstorming an event to provide women what she called “breast education” and encourage them to get mammograms.

There, a free barre class will be hosted for 30 registrants. After the class, area health professionals will host a public session at 11:15 a.m. on breast health and its misconceptions over complimentary pink mimosas.

Then, the event will move to The Brass Eye a block down at 205 N. Second St., where the bar will offer discounted pink mimosas and cupcake-maker Frosted by Linz will provide The Fighter cupcake to commemorate those fighting breast cancer. Both specialty items’ proceeds will go to breast cancer research.

Other Niles businesses will also have a presence at the event. Jim’s Smokin’ Café will provide frittata. J&R Specialty Printing and DMT Converters will provide complimentary tank tops. Luminous Hair Spa will offer coupons, SLR Pilates will offer gift certificates and Waggoner, a realtor for Berrien Property, will offer drawings for gift baskets.

While the event is meant to be fun, Waggoner said education is still at the event’s core.

“If I get one person to go get their mammogram, then I consider it a success,” she said.

She said that often hears three reasons as to why people do not get mammograms, which, according to many health professionals, are the best way to take preventive measures against breast cancer.

Some people are nervous about being pressed by a machine, she said. Others are nervous about any potential pain. The most common reasoning she has heard, however, is that people say that no risk factors for breast cancer have manifested.

“‘Why get it done? I’m totally fine,’ Waggoner said, mimicking. “Well, that’s not the case. I just feel like that is a major misconception, and I think I feel passionate about that because I’m proof that it is.”

Waggoner herself had no signs of breast cancer. It did not run in her family. She had no bumps. She felt no pain.

All she did was take a proactive mammogram. As a result, she had a small surgery, a quick treatment and prevented a potentially dangerous disease from growing.

Waggoner said that some of the health professionals present may be able to direct participants to discounted mammogram services and take names for future appointments.

DOWAGIAC — The city of Dowagiac Public Safety Department and Fire Department are going head to head in a lifesaving... read more