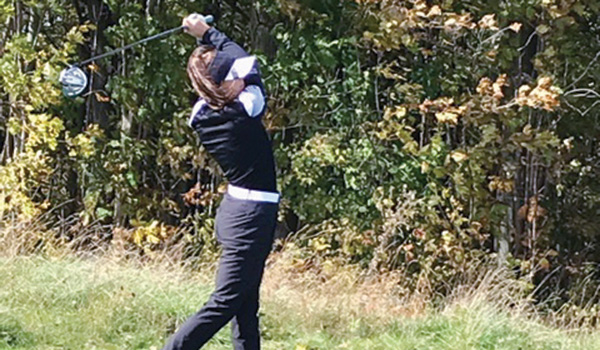 Dowagiac senior Greta Whitaker tees off at the Division 3 state golf finals at The Meadows on the campus of Grand Valley State University. (Submitted photo)

DOWAGIAC — History was made this past weekend when Dowagiac senior Greta Whitaker stepped onto the tee to begin play in the Division 3 state golf finals at The Meadows on the campus of Grand Valley State University.

Never before had a Chieftain girls golfer reached the state finals. Whitaker, who earned All-Wolverine Conference first-team honors after tying for the top spot at the league tournament but lost in a playoff, qualified for the finals by winning a playoff at the regional hosted by Niles Oct. 7 at Orchard Hills Country Club.

Whitaker battled nerves throughout the first round, according to coach Bob Turner. Although she hit the ball well from tee to green, those nerves kept her from playing well around the green.

“She was a little nervous on the first day, and it had an effect on her short game,” Turner said.  “She never really got comfortable on and around the greens, but day two went better.”

Whitaker finished with a 98 on the first day. She would bounce back to shot 91 last Saturday, which gave her a two-day total of 189, which was good for a tie for 46th place out of the 108 golfers who competed in the state tournament.

“She did an amazing job dealing with the pressure,” Turner said. “I could not have been prouder of her. She represented herself, her teammates, the school and the town wonderfully.”

Niles cannot keep up with Bearcats

BATTLE CREEK — The Niles football team could not quite keep pace with host Battle Creek Central in a 49-42... read more