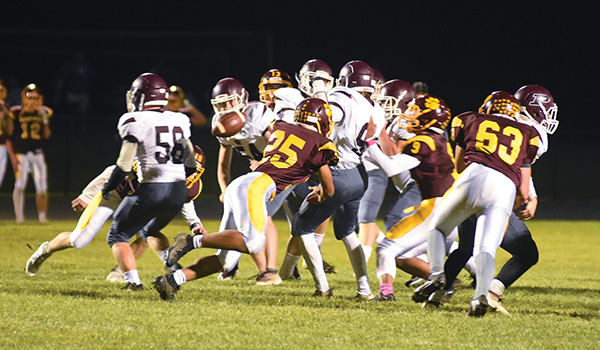 NILES — It was a wild Senior Night at Selge Field as Brandywine played its final regular-season game at home Friday night.

In a game that featured a little bit of everything, including multiple on-side kickoff recoveries by visiting Parchment and a fumble returned for a touchdown by the Panthers, it was the Bobcats that came away with a 57-35 victory.

Abrams, who ran for 169 yards on 19 carries, became the first Brandywine running back to reach the 1,000-yard milestone in three consecutive seasons. Abrams also had a touchdown run of two yards.

Brown, who caught five passes for 134 yards and four touchdowns, surpassed Matt Kidwell for most touchdown receptions in a single season with 13. Brown’s touchdowns came from 57, 15, 23 and four yards out.

Gouin, who was 6-of-10 for 138 yards and the four touchdowns, passed Andrew Duckett for most touchdown passes in a single season with 22. Gouin also ran for 71 yards on 10 carries. He scored on a pair of touchdown runs, measuring eight and 13 yards respectively.

“This is crazy,” said Brown following the game. “I just never thought it would be like this. We are 8-0 right now, and it has been a great senior year.”

Abrams, who has been the face of the Brandywine football program for most of the last three seasons, was also excited about where the team is at this point in the season.

“It is very emotional,” he said. “I have been here since I was a freshman. I never expected us to be undefeated right now. When we started the season 3-0, I thought we might have a chance. We have just kept it rolling.”

Veteran Brandywine coach Mike Nate knows that his team was in a battle with the Panthers.

“We gave up more points tonight than we have the other seven games put together,” he said. “But it is a win. We needed a challenge like this. Moving forward, we have to play better.”

Nate had nothing but praise for his seniors.

“This senior class has done a great job,” he said. “They have made two playoff appearances in a row, won 15 straight regular-season games and 8-0 this year. A great class.”

Brock Prenkert scored the other Brandywine touchdown on a one-yard run.

The Bobcats finished with 488 yards of total offense, including 315 rushing.

Parchment had 385 yards of total offense, including 222 yards passing. The Panthers’ 35 points are more than the Bobcats had given up the entire season. Entering the game, Brandywine had only allowed 33 points.