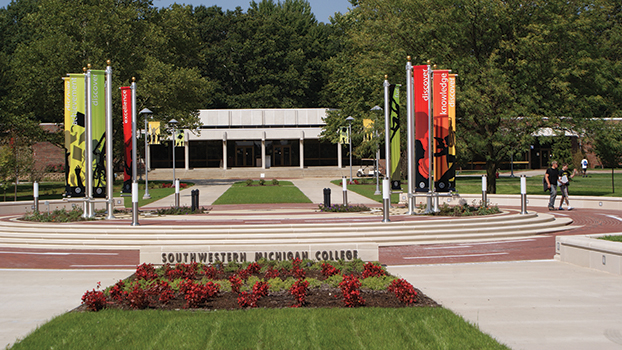 DOWAGIAC — Dr. Joseph Odenwald was unanimously selected as the eighth president of Southwestern Michigan College by the board of trustees Monday night.

Odenwald is the current vice president of student services and has been at the college since 2017. He will succeed Dr. David Mathews, who announced earlier this year his planned retirement from SMC.

To set the tone for the discussions of all four candidates during Monday evening’s board of trustees meeting, Secretary William White began by saying he was impressed with all four of the candidates and noticed the talent that the community college has.

White said he picked one person who he personally thought had skills and strong interpersonal communication with faculty, the community and students.

“I just thought in the presentation, I listened to the vision this person had for this institution through the communication he gave us that day, the history, the mission, the values of this college,” White said. “I think this person is committed [to the idea] that this institution is a learning institution. It’s not just a teaching institution; it’s for people to learn at. I believe this individual is conservative and responsible. … I think they align with the focus of this board and what we’ve talked about the last couple of years with enrollment being the key to continued excellence.”

White went on to say his choice would be Odenwald.

Trustee Dr. Elaine Foster echoed White’s sentiments that all four candidates’ presentations kept the mission of the college in mind the whole time, but presented it differently.

“It’s just where are we at in our culture here and how we approach everything these days that to me that started to sort it out,” Foster said. “I’ve been torn back and forth. They are all four great candidates.”

Foster said as she went back over the presentations and there was one candidate that came to the top for her — Odenwald.

Treasurer Becky Moore added that she felt while listening to the presentations that the other three candidates were already in their ideal positions.

“I felt like [the other three candidates] were in the right positions already. They have so much more to offer the college in the positions that they are in that they are doing such an excellent job with,” Moore said.

Trustee Dr. Heidi Grabemeyer-Layman said when looking at the candidates after their presentations and submitted questions were received, for her, one candidate stood out.

Vice-Chairman Keith McKenzie said every candidate would have been capable of being the president.

“I was amazed,” he said. “I just didn’t know we had that kind of ability here, and it was wonderful to hear what this college is about.”

McKenzie ended his comments by saying he was rooting for Odenwald.

Chairman Thomas Jerdon said after going through the video of interviews and applications, he said one cover letter stood out.

Jerdon said traditionally, most cover letters would not be structured that way.

“That was kind of a moment, ‘you had me at hello,’ when I looked at his cover letter,” Jerdon said.

Jerdon said he was also impressed by Odenwald’s student services strategic plan, his presentation and Odenwald’s letters of recommendation.

Jerdon also said he was impressed by Odenwald’s response to the question of why he wanted to work at SMC.

“He said, ‘I don’t want to work at a place that I can’t identify with the values and mission statement,’” Jerdon said.

White concluded trustee comments by saying Odenwald had not forgotten what it was like to be a student.

“I think that’s really important at our institution,” White said.

White made the motion to select Odenwald as the eighth president of SMC.

Grabmeyer-Layman supported the motion as a roll call vote unanimously confirmed the board’s decision to select Odenwald the eighth president of SMC.