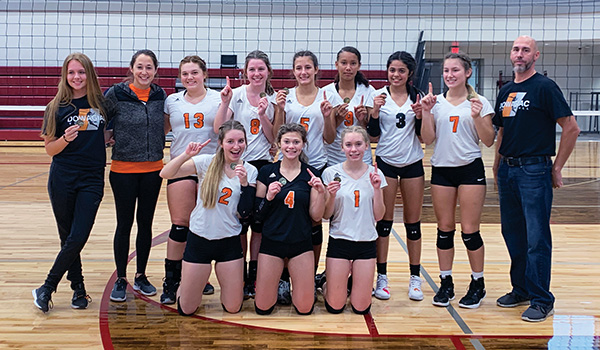 What the score does not tell is how well the Chieftains played in their 25-18, 25-22 and 25-23 loss to the Bulldogs, who are one of the top teams in the conference.

“I’m not sure the stats indicate how well the girls played tonight,” said Dowagiac coach Tony Hooley. “It’s hard to stat the scrappiness and heart the girls played with, as they battled the top team in the Wolverine Conference on their turf.”

Hooley said that his team’s statistics do not show how hard the Chieftains played from the beginning until the end of the match.

“I couldn’t be more proud of them,” he said.

Nicole Whan had another bid match for the Chieftains as she had 24 assists to go along with six kills, an ace, a dig and two blocks.

The Chieftains were in action on Saturday as well as they finished second at the Constantine Invitational.

Dowagiac will host South Haven in a Wolverine Conference match on Thursday.

The Chieftains were first-place in their pool after defeating Gobles, Watervliet, Parchment and Marcellus.

EDWARDSBURG — A 40-point first quarter was all host Edwardsburg needed to secure its 22nd consecutive victory as the Eddies... read more