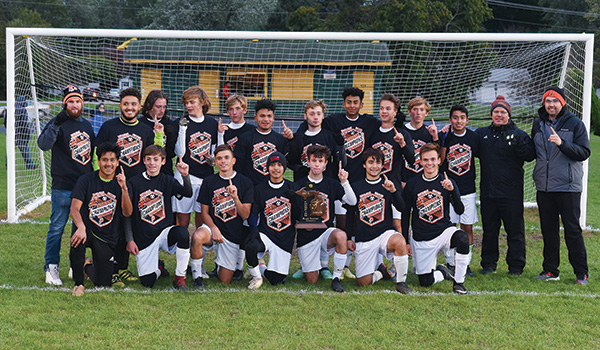 COLOMA — The Dowagiac soccer team was on a mission to make history Wednesday night.

Veteran Dowagiac coach Mike Williams was pleased that his team got back to playing their style of soccer, but also were able to adjust on the fly as South Haven went with a different formation than in the previous matches.

“We did a good job running the line and attacking from the side compared to trying to run through the center,” he said. “We were able to push up another center-mid to keep pressure on the offensive side. Cristian did a nice job keeping pressure up top spreading the defense out.

Despite cold, windy and wet conditions, the Chieftains were able to overcome an early 1-0 deficit to advance to the regional semifinals against host Grand Rapids South Christian (17-4-2) at 5:30 p.m. on Tuesday.

The Rams’ Christian Moreno put South Haven on the board first in the 24th minute.

That lead did not last long as Chieftain senior Cristian Wilson took a cross from Cole Weller and headed it into the back of the net three minutes later to tie the score at 1-1, which is how the first half ended.

Just as they did in the first half, South Haven was the first to score in the final 40 minutes.

Luis Mora made it 2-1 only to have Wilson again tie the score as he took a pass from Matt Mosier to tie the match at 2-2 in the 67th minute.

Wilson went from receiving to giving to put the Chieftains ahead for good.

The senior found Cole Weller cutting to the goal and he beat Rams’ goalkeeper Chebio Perez with what turned out to be the winning goal in the 68th minute.

Dowagiac continued to attack the net trying to stretch its lead, taking advantage of some mistakes by South Haven, which was scrambling to find a way to tie the match.

After missing a free kick with 30 seconds remaining, Dowagiac was able to get the ball back up the field as Perez, who came forward for the free-kick, scrambled to get back into the net.

Wilson fed the ball to a Chris Mosier, who was racing up the field. He easily chipped the back into the back of the net to complete the scoring.

Dowagiac will attempt to snap its losing streak in the Division 3 regionals.

Dowagiac was eliminated in the regional semifinals last year by Hudsonville Unity Christian 8-0.

Unity Christian went on to win the Division 3 state championship in overtime against Grosse Ile, 3-1.

In 2017, the Chieftains were defeated by Grand Rapids South Christian 5-1 in the regional championship match last year after defeating Hopkins 2-1 in the semifinals.

NILES — In the SMAC East and West crossover volleyball match between Niles and Kalamazoo Central, the Vikings ended up... read more