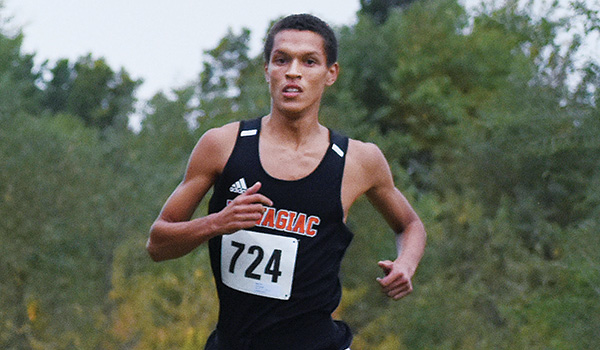 Shawn Little won the Wolverine Conference cross country championship with a time of 16:06 on Tuesday at Sturgis. (Leader photo/SCOTT NOVAK)

STURGIS — Shawn Little has not had the type of fall he wanted for his senior year of cross country, but that did not mean he was not up to the challenge at the Wolverine Conference Championship hosted by Sturgis Tuesday.

Otsego captured both the boys and girls team championships. Edwardsburg placed seventh and Dowagiac eighth in the boys race, while the Eddies were ninth in the girls race.

Dowagiac had just one female runner and was unable to post a team score.

Little and teammate Cole Parker were both first-team All-Wolverine Conference runners, as was Edwardsburg’s Jack Leman. Parker posted a time of 17:14 to finish 11th, while Leman ran a 16:39 to finish fourth overall.

Dacey Divane was the top Eddie runner in the girls race as she placed 40th with a time of 23:12.

Dowagiac’s lone runner was Alessandra Zaghetti, who was 62nd with a time of 28:09.

The Eddies’ lone goal was scored by Nate Bessinger in the 71st minute. Juve Soto had the assist.