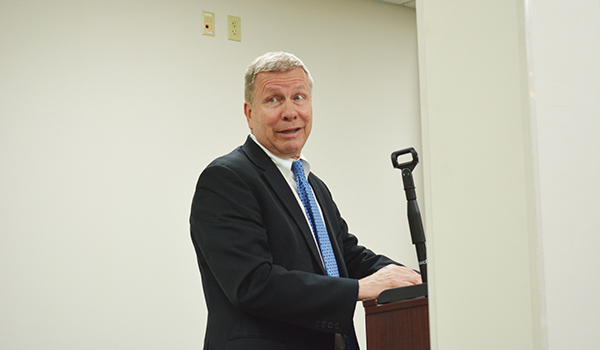 CASSOPOLIS — The Cassopolis Village Council learned more about the effects the marijuana industry could have on its community on Monday.

Following a vote earlier this year to take steps toward allowing medical marijuana facilities within village limits, the Cassopolis Village Council is seeking input from experts in the field. Monday evening, during the council’s regular meeting, Ken Stecker from the Prosecuting Attorneys Association of Michigan presented on the topic.

“[Stecker] has a wealth of knowledge on this topic,” Fitz said. “You are involved in a 100-year decision. This decision will change your community for the next 100 years. It is no small matter, so I applaud [the village council] for wanting to know all the facts regarding this topic.”

In his presentation, Stecker outlined both the state and national laws regarding medical and recreational marijuana.

“That is why more than 500 cities, villages and townships, at this particular time, have decided to opt out, including the city of Kalamazoo,” Stecker said.

Following Stecker’s presentation, councilmember Eugene Wagner said Cassopolis has already opted out of recreational marijuana and that the only decisions the council is looking to make would regard medical marijuana.

Also Monday, the village council got its first look at a new mural to be painted on Broadway Street.

Chris Stackowicz, who painted the village’s new “Welcome to Cassopolis” mural on the corner of Broadway and State streets, is working on a new mural to be painted in the alleyway by the Veteran of Foreign Wars building. The alleyway work is being funded through a Michigan State Housing Development Authority Neighborhood Enhancement Program grant.

“In regards to the alley, we are moving right ahead,” Stackowicz said. “We want the community to really take ownership of it.”

The alleyway mural will feature a flowing American flag and silhouettes of servicemen and servicewomen. Stackowicz said he hopes the painting will be completed by Veterans Day.

Councilmembers said they enjoy Stackowicz’s “Welcome to Cassopolis” mural and are excited to see the new mural in the VFW alleyway.