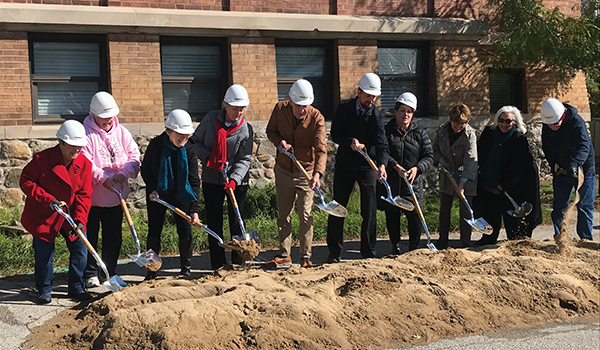 The library expansion will include a community room, study rooms, a quiet reading area and more form for books and computers. The original Carnegie front of the library will also be restored.

As library director Matt Weston faced the crowd, he spoke of the many steps it took to make the library expansion happen.

“This is a vision that started with the board probably a good 10 years ago,” Weston said. “We were putting money aside, trying to save and get some good concept ideas going. It really paid off.”

Weston introduced Dowagiac District Library Board President Judy Lawrence, who thanked past and current board members for aiding with the long term saving and planning of the project.

“We are very happy that you all think about long-term learning,” Lawrence said.

The expansion began with passing a millage in November 2018, working with the Ladies Library Association, listening to library patrons about the additions they wanted to see, hearing support from Dowagiac City Council and working with local townships: Silver Creek, Wayne, Keeler and Bainbridge.

The design itself was created in unison with HBM Architects, who specialize in Carnegie building restoration, Weston said.

“There are just a handful of architects in the country who can really do this,” Weston said. “I think you’ll really be impressed with how well everything will match up.”

Weston introduced Dowagiac Mayor Don Lyons to address the crowd. Lyons said when he was first elected mayor in 1997, he examined the responsibilities of the city and saw how the library was struggling to make ends meet financially. The money the city was allocating to the library was also not adequate, he said.

“Something had to be done,” Lyons said. “The solution for us was to go to the Ladies Library Association and suggest that they form a committee to look at taking over the library. That would require a millage and support from the community.”

Lyons said he hoped that someday the library would be properly funded and could have an addition to make it functional in the 21st century.

“Today that dream came true,” he said. “Credit goes to the people that have been stewards of the library for the last 20 years, the administration that has put this together, and the great work that went into getting a millage passed.”

“This is going to become an entire complex serving the community of Dowagiac,” Lyons said.

And with that, shovels hit the dirt and construction began on Monday to make the expansion a 21st century reality.

A sunny Under the Harvest Moon draws crowds

DOWAGIAC — A sunny, but chilly day brought the crowds to downtown Dowagiac Saturday for the city’s annual Under the... read more