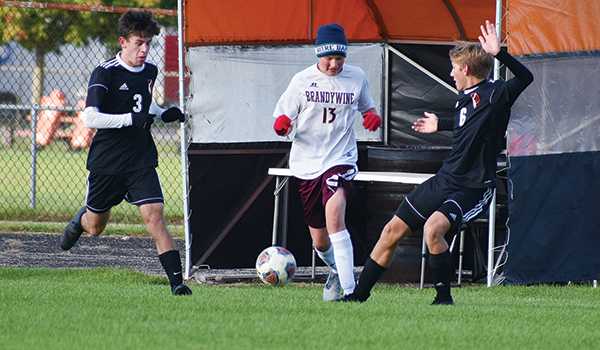 DOWAGIAC — With temperatures in the middle to lower 30s and wind chills closer in the mid-20s, the goal of the Dowagiac soccer team was to take care of business and get off the pitch as quickly as possible Saturday morning.

The Chieftains accomplished that goal with a 9-0 win over Brandywine in the opening round of the Division 3 district soccer tournament.

Dowagiac, the two-time defending champion, advances to Monday’s semifinals against Berrien Springs. The winner advances to face either South Haven or district host Coloma on Wednesday.

“We moved the ball well,” said Dowagiac coach Mike Williams. “We have been working all week on explosion off the ball. If you heard tell them to continually attack the ball to increase the speed of the game. We had been sitting back the past couple of weeks, which has cost us. Whereas initially, at the beginning of the year, we were doing that automatically. We haven’t been that, so I brought that back because that is what we have been lacking.”

Dowagiac scored early with four goals in the first 15 minutes. Cole Weller, Cristian Wilson, Ben McCrorey and Isaac Saavedra all picked up goals for the Chieftains.

The Chieftains scored three more goals between the 23rd and 25th minutes with Gustavo Cruz, Adrian Lee and Wilson finding the back of the net.

Brandywine keeper Nicholas Needham helped keep Dowagiac out of the scoring column with some acrobatic saves over the next 16 minutes, but just when it appeared the match would be extended to the second half, the Chieftains scored back-to-back goals in the final minute to stop the match due to the mercy rule.

McCrorey got his second goal and Noah Green scored for the Chieftains.

DOWAGIAC — The Dowagiac volleyball team had a busy week as it swept Sturgis in Wolverine Conference action on Thursday... read more