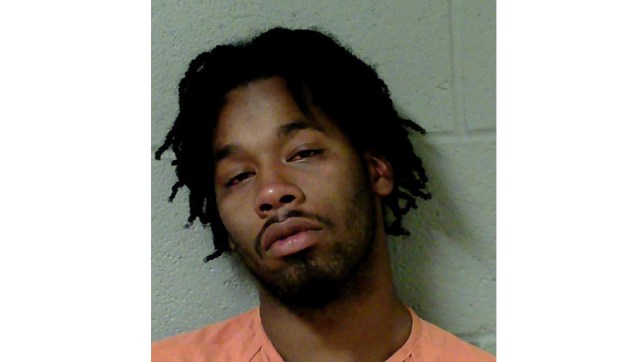 Suspect in Dowagiac shooting sentenced to 43 years in prison

CASSOPOLIS — A suspect who pleaded guilty to fatally shooting a man outside of a Dowagiac bar in July 2018 has been sentenced to decades behind bars.

In court Monday, Rolandis Russell, 25, of Dowagiac, was sentenced to 43 to 65 years in prison for the second-degree murder of Fabian “Jimmy” Wesaw, 42, of Dowagiac. He pleaded guilty to the crime during a Sept. 10 court hearing.

The crime occurred in the early morning hours of Sunday, July 29, 2018, outside of Beeson Street Bar in downtown Dowagiac. According to court testimony, Russell shot an AK-47 into a crowd, striking and fatally injuring Wesaw. At the time of the shooting, Russell had fled to a gas station across the street following an altercation with two individuals and fired his weapon 13 times to injure one of the men following him, whom he described as threating, according to the presentence investigation. It was then that Wesaw, a bystander, was shot. He was pronounced dead at the scene.

“This is something that has impacted so many people’s lives. Fabian Wesaw certainly impacted many people,” said Cass County Prosecutor Victor Fitz. “He should still be here with us today. … This defendant did great dishonor to himself, his family, to Jimmy Wesaw on July 29, 2018. Your honor, he deserves every day and every hour he has earned in prison for what he did.”

The courtroom was filled Monday with friends and family members of Wesaw, many of whom clutched tissues in their hands to wipe tears from their eyes throughout the proceedings. Two of his family members, his sister, Tracy Wesaw, and daughter, Amara Wesaw, gave statements during sentencing.

In her statement, Tracy described the terror of learning her brother had been killed and the effect the shooting had on her and the rest of Wesaw’s family.

“The life I knew was gone in the blink of an eye. Everything will be forever changed,” she said. “There are so many questions I will never have answers to. There are so many things I wish I could have told him before he died. I always thought I would take my last breath before he did. Every day I wonder how those last moments were for him. What was going through his mind? Did he know he was dying? Did he feel any pain? I am now constantly consumed with thoughts of who might die next. … Losing my brother has been and continues to be an agony so consuming.”

Amara Wesaw, Wesaw’s oldest daughter, presented both her own statement and her sister’s statement. In the remarks she read, Amara said her father’s death had a profound effect on both herself and her sister, leading to depression and anxiety.

“It’s hard to believe that I am never going to hear [Wesaw] laugh again or joke or make that weird noise he would make when he would pretend to slap something,” Amara said through tears. “I’ll never eat his chili again or try to unlock his house door for five minutes because the keys stick so much. I’ll never hear his feet dragging through the hallway because picking up his feet was too hard. I’ll never make a mistake and hear him take a deep, patient breath and say. ‘that’s OK.’ I’ll never see him hug my brother and say, ‘I love you, son.’ I’ll never see him bundled up in the stands with hot chocolate. I will never be able to call him when my car makes noise again, and I’ll never be able to make more memories with my dad. Your honor, most people my age will have the opportunity to make more memories with their fathers. For the rest of my life, I will only be able to make memories from memories, and I will only be able to talk with and cry to a [headstone].”

Wesaw also had a son, who was 13 years old at the time of his death last July.

When it was the defense’s turn to speak to the court, public defender Tat Parish said he was “severely handicapped” in what he could say, as he could not say anything that may bear on Russell’s case upon appeal. Despite this, Parish pointed out that Russell has no prior felony convictions.

“There is no question that he was approached by others who were threatening and a real danger to him. No question about that at all,” Parish said. “It is quite clear that he never intended to kill Mr. Wesaw. Beyond that, I hesitate to go further into it.”

When given a chance to speak, Russell submitted a letter to the court and apologized to Wesaw’s family, saying that he often cries about Wesaw’s death. He said that while he had never met Wesaw, he was sure that he was a good man with a good heart.

“I just want to say sorry,” he said, facing the family. “I know you may hate me forever, and I understand that. It may seem that I am heartless, but I am far from heartless.”

Cass County Circuit Court Judge Mark Herman said Russell, who is a father to a young son, could be paroled when he is in his 60s.

NILES — The Niles Buchanan YMCA is back to normal operations following a brief evacuation Friday morning. According to Niles... read more