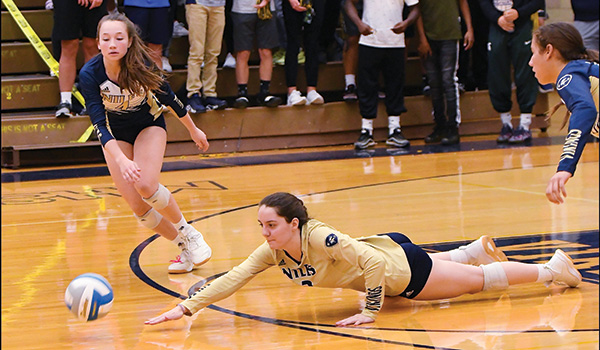 NILES — For the past couple of weeks, the Niles volleyball team has been struggling.

Granted, it has been against some of the top teams in the SMAC and the state of Michigan, but struggling none the less.

Veteran Niles coach Jenny Nate said that she and the squad were aware of what was causing the struggles but had not been able to fix them.

Just as it had done earlier in the year against South Bend St. Joseph, Niles flipped the switch after losing the first two sets to knock off the Huskies.

“This was an awesome Senior Night for our team,” Nate said. “The seniors stepped up, and each and every one of their teammates also stepped up to seal this win. It takes all 12 of these girls working hard together at practice day in and day out, in order to be able to win when they are down and forced to come back. It was a combination of heart, hustle, energy, teamwork and mental toughness.”

All of the seniors — Bianca Pickens, Zoie Appleberry, Grace Florkowski, Taylor Bailey and Nikki Nate — had a hand in the comeback win.

Appleberry had 13 points, an ace, three kills, a block and nine digs, while Florkowski had nine points, 15 digs and 20 assists. Nate finished the night with eight points, two aces, 14 kills and two blocks.

Pickens contributed eight points and 19 digs to the victory. Bailey ended the night with 12 kills and five digs.

With a big win under their belts, the Vikings (18-17-4, 2-3 SMAC West) gets some time off before hosting Kalamazoo Central in the SMAC crossover Wednesday.

Nate is hoping the comeback sparks her team moving forward.

“This is exactly the big win and momentum we needed tonight, and I’m incredibly proud of my team,” she said.

After winning for the second straight year over crosstown rival Niles on Monday, the Bobcats turned their attention to host Buchanan for a BCS Athletic Conference match Wednesday night.

Brandywine continued its winning ways over the Bucks, but it was not as easy as the 3-0 sweep would indicate.

After winning the first two sets 25-16 and 25-17, Buchanan raced out to a huge lead in the third set forcing Brandywine Ray Prestly to call a time out and challenge his team.

The Bobcats chose the latter and behind strong serving from Liz Stockdale and Bethany Duval, along with solid net play from Duval, Kristen Alvord and Kylie Myers, were able to catch the Bucks at 21-21 and earn the victory.

Duval had a team-high seven aces in the match to go along with seven kills and six digs, while Stockdale had three aces, three digs and 15 assists. Myers ended the evening with 11 kills.

“I changed my line up, and then they changed theirs,” he said. “So, once they settled back down, we got back into it. We needed to start taking care of the things they could control and put it back together.”

Prestly is hoping the third set will pay dividends, not only on Saturday against some strong competition at the Coloma Invitational, but once the postseason begins.