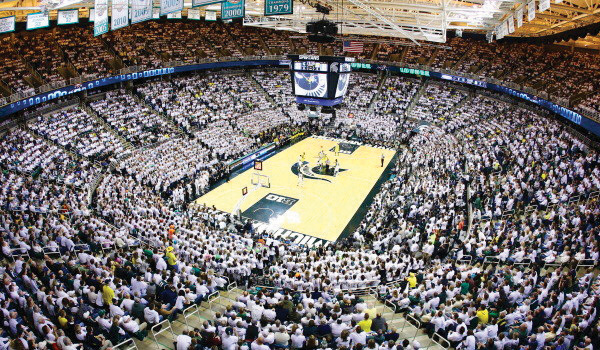 The MHSAA girls basketball semifinals and finals will return to Michigan State’s Breslin Center as early as this season. Should the Breslin been book for the NCAA Tournament after the 2020 season, Western Michigan’s Read Fieldhouse would be the alternate site. (Submitted photo)

EAST LANSING — The Michigan High School Athletic Association’s girls basketball semifinals and finals weekend could return to the Breslin Student Events Center as quickly as this upcoming 2019-20 season, with Michigan State University hosting the event this winter and in future seasons when the Spartans women’s basketball team is not selected as an opening-round host for the NCAA Tournament.

Breslin hosted the girls basketball semifinals and finals from 2004-06 and 2010-17. However, the potential for a conflict with the NCAA Division I Women’s Basketball Tournament led to the MHSAA moving the event for the past two seasons. The NCAA awards top-four seeded teams an opportunity to host the first two rounds of its Division I tournament, and the NCAA event falls almost annually on the traditional dates of the MHSAA girls basketball championship weekend — setting up the possible conflict of both events being scheduled to play at Breslin at the same time.

During an initial three-year contract beginning this winter, Breslin tentatively will be the host of the semifinals and finals. If, beginning in 2021, the Spartans are seeded fourth or higher for the NCAA Tournament and selected to host first and second rounds, the semifinals and finals will be played at Read Fieldhouse’s University Arena on the campus of Western Michigan University.

Hope College’s DeVos Fieldhouse in Holland will serve as the alternative site if Breslin is not available in 2020, as Read is hosting the Mid-American Conference Gymnastics Championships during the weekend of the semifinals and finals.

“We are thankful for the graciousness of all parties involved to allow for this opportunity to bring the girls basketball semifinals and Finals back to the Breslin Center,” said MHSAA Executive Director Mark Uyl. “From the Breslin Center staff, to coach Suzy Merchant and the MSU women’s basketball program, to MSU law enforcement, ticketing and hospitality and then Western Michigan and Hope College and their facilities people for agreeing to reserve their arenas for us in case it’s needed — this agreement happens only because of the immense cooperation by everyone involved.”

The semifinals will be played this upcoming season March 19 and 20, 2020, with all four championship games March 21. The NCAA Division I Women’s Basketball Tournament’s opening weekend is March 20-23, with the bracket and seeds to be announced Monday, March 16.

The MHSAA boys basketball semifinals and finals traditionally are played at the Breslin Center the following weekend, this upcoming season March 26-28. All games for the NCAA Men’s Basketball Tournament are played at neutral sites, and there is no possible conflict between the two events.

Read Fieldhouse, home to Broncos teams including the women’s and men’s basketball programs, unveiled a new basketball court at the start of the 2015-16 season among a variety of improvements to the facility over the last five years. The MHSAA girls basketball finals were played at Read from 1982 to 85, and WMU also hosted the MHSAA girls volleyball finals from 1996 through the 2007 winter season, the last before the MHSAA season for the sport moved to the fall.