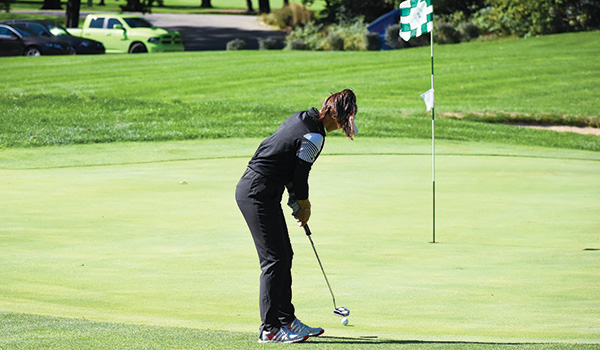 NILES — For the past two and a half to three weeks, Dowagiac senior Greta Whitaker has raised her game on the golf course.

Whitaker said that the recent change has been more about mindset than anything physical. She is not the biggest girl on the golf course, but due to work she has done in the weight room for both softball and golf, she is one of the longest hitters in the field.

But that is not what has made the difference recently.

“My mindset has changed,” she said after winning a one-hole playoff at the Division 3 regional at Orchard Hills Country Club Monday. “I have gotten a lot better mentally, not physically. That has helped me a lot.”

That has also led to being more confident on the golf course. The playoff hole was a perfect example. Whitaker had reached the ninth green on two shots during regulation and putted for an eagle. She came up a bit short, but made her next putt for a birdie.

When she teed it up on No. 9 for the playoff, she knew exactly what she wanted to do.

“It actually helped, because my drive was further than it was the first time,” Whitaker said.

When she reached her ball, she was confident she could get it up and down for the win.

Whitaker is disappointed that she will not be making the trip to Grand Valley State University with her teammates for the state finals, but she is still looking forward to the finals.

“I am so excited,” she said. “It would have been a lot better to make it as a team, but this just as good. I still get the represent Dowagiac and that is exciting.”

Dowagiac coach Bob Turner shared Whitaker’s mixed emotions. He was thrilled for his senior, but disappointed that the entire team did not advance.

“The day ended really well,” she said. “I can’t even talk. They are done. I wanted so badly for them to go. Greta winning a playoff put a smile on everyone’s face.”

Turner has also seen the change in his senior.

“She really has stepped it up,” he said. “She definitely wants to play somewhere next year and she will. She is going to get a lot better when she moves on.”

To play off a twist from a verse of the Grateful Dead song “Truckin,’” what a long, great day it... read more