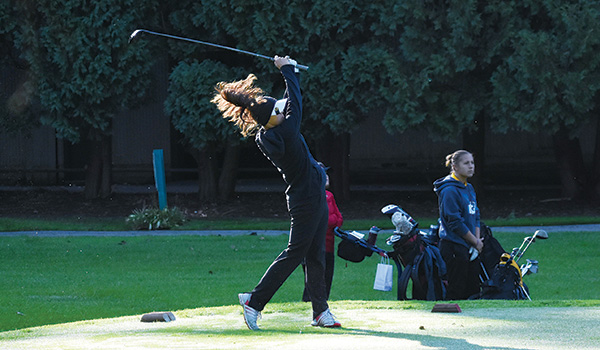 NILES — Host Niles, Dowagiac and Edwardsburg were unable to quality for the Division 3 state finals on Monday.

Marshall captured the regional championship at Orchard Hills Country Club as it shot 381 to easily outdistance runner-up Charlotte, which shot 401. Plainwell was the third and final team to qualify for the state finals, which will be held at The Meadows on the campus of Grand Valley State University Oct. 18-19. The Trojans shot 414.

The Vikings missed qualifying on their home course by a single stroke as they shot a 414.

Whitaker earned the final individual spot as she won the first playoff hole.

“I’m still shaking,” Whitaker said. “[Reaching the green with several strokes to give] made it a little easier because I knew I had it. That was my mind set, but I was still super nervous.”

Dowagiac coach Bob Turner was disappointed with the outcome as a team, but pleased for his senior.

“I can’t even talk,” she said. “They are done. I wanted so bad for them to go as a team. They have been so close three out of the four years, but Greta winning the playoff put a smile on everybody’s face.

Also qualifying were Pat Grau, who earned medalist honors with an 87. Allegan’s Emma Franklin was the second qualifier with a 93.

Niles coach Dan Brawley was equally disappointed that his team missed qualifying by a single stroke.

“I always tell the kids that every shot counts,” he said. “Today that was right in front of us.”

BLOOMINGDALE — The Brandywine volleyball team defeated Zion Christian 25-12 and 25-13 to win the Bloomingdale Invitational on Saturday. In... read more