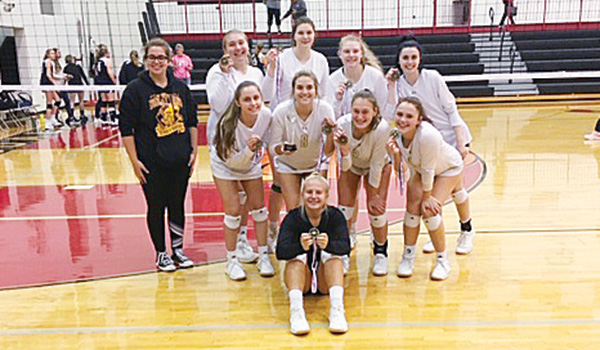 BLOOMINGDALE — The Brandywine volleyball team defeated Zion Christian 25-12 and 25-13 to win the Bloomingdale Invitational on Saturday.

The Bobcats, who hosted crosstown rival Niles Monday night, are now 21-6-1 on the year.

BRONSON — The Niles varsity volleyball team struggled with consistent play and momentum throughout the day at the Bronson Invitational on Saturday.

“That lack of consistency and ability to win runs during consecutive rotations makes it tough to win against very strong teams, and that is the battle we faced all day,” said Niles coach Jenny Nate. “We took down Sturgis the second match 25-20 and 25-13. But, when faced with No. 4-ranked Bronson, we again struggled to get runs going and fell 15-25 and 16-25. Finally, in bracket play, we matched up against Edwardsburg, and although we were able to get some runs going again, we couldn’t close the gap to finish and lost 20-25 and 19-25.”

Nate said her team will keep moving forward as it begins the final weeks of the regular season.

“Our hitters are working hard at practice to play aggressive, challenge each other, maintain consistency, put the ball down and have confidence offensively,” she said. “We get it from a few hitters at time, but our ultimate goal is to have balanced scoring from all of them at once. They are a very focused, determined group. We know what we need to do, and we will keep working daily to make it happen moving forward.”

Niles, which travels across town to face Brandywine Monday night, is now 17-16-4 on the season.

Rangers blow out White Pigeon in battle of unbeatens

WHITE PIGEON — It was billed a showdown between the top two teams in the Southwest 10 Conference. It was... read more