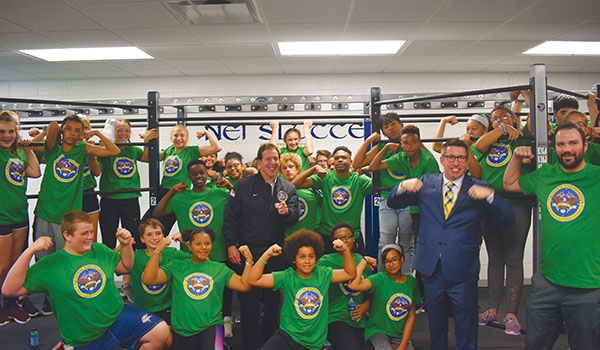 NILES — While the rest of Niles yawned and warmed up Friday morning, one of the first chill mornings in months, 807 17th St. in Niles was abuzz. Students and staff of Ring Lardner Middle School cheered and clapped in wave after wave.

The excitement was generated by cheerleaders performing, Niles’ fight song playing and motivational chants. Obtaining a new fitness center was likely a cause, too.

From 9 to 10 a.m., school staff and National Foundation for Governors’ Fitness Councils staff ceremoniously unveiled a donated DON’T QUIT Fitness Center worth $100,000 from the foundation.

Ring Lardner is one of three schools in Michigan to receive the grant and accompanying gym this year. Schools in three other states also received the grant.

The crowd answered with a roar of whoops.

The foundation awards and installs fitness centers each year to schools that demonstrate a commitment to health. Both students and staff helped apply for the grant.

Two years ago, Ring Lardner did not have health instructors. Now, it offers nutritional, emotional, mental and physical well-being programs and activities to its students.

“What we look for are the very simple things: great teachers; great kids; great community; great moms and dads, grandmas and grandpas and aunts and uncles [who] all care about you,” Steinfeld said. “That’s why we’re here.”

After speeches by Steinfeld and principal Adam Burtsfield, the school gathered to cheer on Steinfeld as he cut a commemorative ribbon.

Then, a group of about two dozen students donning green National Foundation for Governors’ Fitness Councils shirts headed to the new fitness center in the middle of the school to show staff and press a sample workout circuit.

The center houses a variety of workout machines that work out muscles from around one’s shoulders to around one’s calves. It is meant to be used as part of a fitness circuit, where students move from one machine to the next in short spurts of time, working out different body parts in the process.

Children working out had a general response to their fitness center: “It [was] cool.”

“I know our kids deserve a lot,” said Burtsfield. “It’s nice to get them things they deserve.”

He said one of the most difficult parts of getting the grant and installing the gym was keeping it on the down low.

“Oh my goodness. The minute they put this thing in, [assistant principal] Evan [Winkler] and I were chomping at the bit to get people in here,” he said. “It was almost like keeping the secret of actually receiving the award? It was actually like this was just as hard.”

Students will soon use the center in the fitness classes, and plans are being discussed to expand opportunities for its use.

POKAGON TOWNSHIP — Three Dowagiac residents were injured in a rear-end crash in Pokagon Township, according to the Cass County... read more