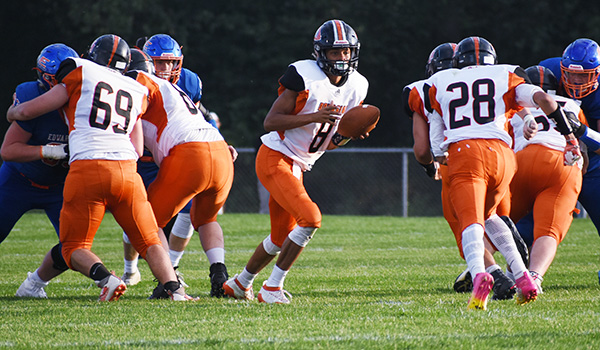 Dowagiac’s Cailyn Murphy threw for 249 yards and a pair of touchdowns in the Chieftains’ overtime loss at Otsego Friday night. (Leader file photo)

Dowagiac falls to Otsego in overtime

OTSEGO — Visiting Dowagiac failed on its extra-point attempt in overtime and lost 27-26 to Otsego in Wolverine Conference football Friday night.

Dowagiac got the ball first in overtime and scored on a 10-yard pass from Cailyn Murphy to Hunter Williamson. The extra point kicked failed, leaving the door wide open for Otsego.

The Bulldogs took full advantage as Derek Ward caught a 10-yard pass from Owen Watson. Jack Waters connected on the PAT to give Otsego the victory.

The game was close throughout with Dowagiac leading 13-12 after one quarter on Williamson touchdown runs of five and six yards. Aldreon Henderson connected on the first PAT, but the Chieftains failed on the two-point conversion after its second touchdown.

Neither team scored in the second and third quarters.

Otsego scored first in the fourth quarter to take a 20-13 lead before Dashawn Brooks hauled in a 12-yard pass from Murphy to tie the score at 20-20 after the Henderson kick.

The Chieftains outgained the Bulldogs 328 to 283 in total offense, Dowagiac threw for 249 yards as Murphy was 12-of-20 with a pair of touchdowns and a pair of interceptions.

Dave Collier led the team in rushing with 35 yards. Williamson finished with 24 yards. He also caught a pair of passes for 22 yards.

The Chieftains return to Chris Taylor-Alumni Field Friday night for its homecoming game against Sturgis.

Defense shines as Brandywine wins and qualifies for playoffs

COMSTOCK PARK — Before the season began, Brandywine knew that NorthPointe Christian was going to be a daunting task. The... read more