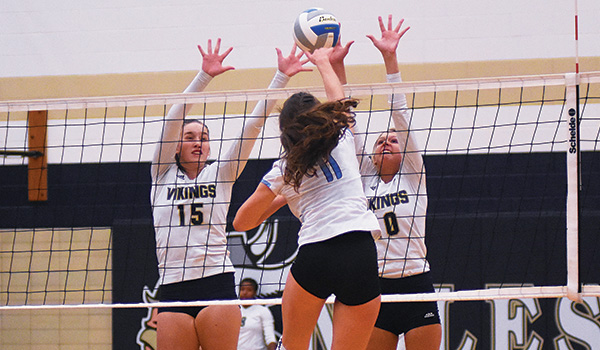 Marika Ruppart (15) returned to the Niles lineup Wednesday night against No. 5-ranked Mattawan. She had missed the previous SMAC West match due to injury. (Leader file photo)

NILES — There were no illusions for the Niles volleyball team as it hosted No. 5-ranked (Division 1) Mattawan in a SMAC West Division match Wednesday night.

The Vikings were well aware that the Wildcats have lost only twice this season, both to Division 1 powerhouses. Mattawan has a 6-foot-5 outside hitter who has already committed to Witchita State and its libero is a candidate for Miss Volleyball.

“We knew we would have to match up on the block, capitalize on every ball and play, and mix up our shots, staying aggressive at all times,” said. Niles coach Jenny Nate. “The first set, we rotated our lineup and tried to match up our block against their 6-foot-5 outside hitter, but they got an early run on us and we just couldn’t get our offense started.”

Learning from its mistakes in the opening set, Niles returned to its regular rotation and played much better.

“We came out battling,” Nate said. “I was pleased with our ability to learn fast, bounce back and close that gap to five points.”

Mattawan regained control in the third set and put the match away.

Nate was pleased with the effort her squad gave and hopes that playing teams like the Wildcats will help her square prepare for the upcoming state tournament.

“The girls stayed completely focused and played their hearts out. Every time we face a team like Mattawan we learn and improve. It makes us stronger, tougher and smarter. The team knows we have to focus on what we did well tonight against that caliber of a team and use it as momentum to prepare for the Bronson Invitational on Saturday.”

Niles, which has already faced a slew of powerful opponents this season. On Saturday, five out of six ranked teams will be competing, including host Bronson, which is the defending Class C state champion.