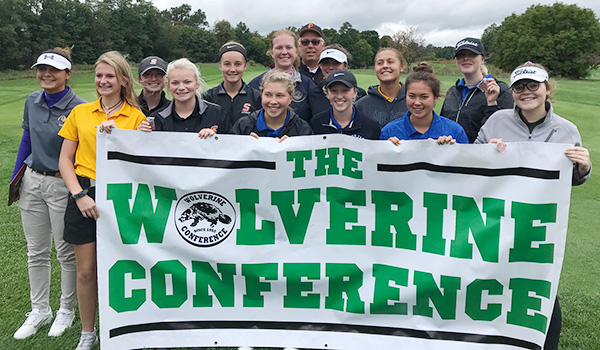 Dowagiac’s Greta Whitaker and Rebecca Franklin were first-team All-Wolverine in golf. The Chieftains’ Bob Turner was named Coach of the Year. (Submitted photo)

RICHLAND — It took more than regulation to decide the Wolverine Conference girls gold championship at Stonehedge North in Richland Thursday.

The Trojans won the league championship based on the fifth-player scoring tiebreaker.

South Haven finished third with a 402, while defending champion Sturgis was fourth with a 403.

Edwardsburg placed seventh in its first year of girls golf with a 465.

Dowagiac’s Greta Whitaker tied Otsego’s Pat Grau for Player of the Year honors as they both shot 83 on the day.

Calley Ruff earned a spot on the honorable mention portion of the all-league squad after finishing with a 103.

Dowagiac’s Bob Turner was named Coach of the Year.

The Eddies’ top finishers were Sara Casey and Aleia Pompey, both of whom shot 112.