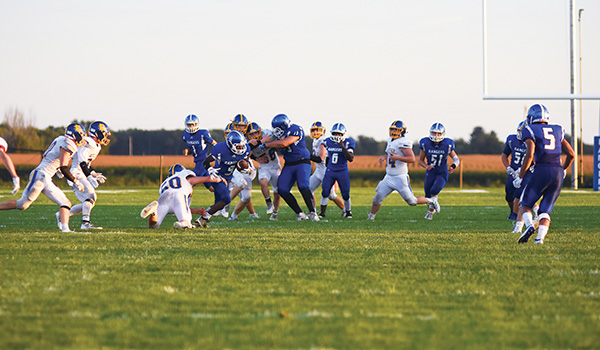 DECATUR — It took days to complete, but the visiting Cassopolis remained undefeated with a 33-11 win over Decatur Saturday morning.

The Rangers and the Raiders were able to get their Southwest 10 Conference contest started on Friday night, but with Cassopolis leading 6-2, the game was postponed due to lightning.

The Rangers showed little signs of being thrown off by having to return to Decatur the next day, as it outscored the Raiders 27-9 to improve to 5-0 on the year.

Cerious Wilson turned in his best game as the Rangers’ starting quarterback as he threw for 110 yards and four touchdowns.

Cassopolis was also able to run the ball effectively against Decatur as it finished with 193 yards. The Rangers were led by Owen Gardner, who had 81 yards on 11 carries with a 24-yard touchdown that opened the game’s scoring on Friday night.

J.J. Hart added 57 yards rushing and caught a touchdown pass from Wilson that was good for 10 yards.

The Cassopolis defense allowed its first points of the season, but still managed to limit Decatur to 194 yards in total offense.

The Rangers have now outscored their opponents 159-11.

Leading the defensive charge Saturday morning were Matthew Anderson and Gage Collins with 10 tackles each. Ahsan Hart had nine tackles, and Gardner had seven.

The Rangers face their toughest test of the season Friday night as they travel to White Pigeon to face the undefeated Chiefs.

Cassopolis is ranked No. 6 in the latest Associated Press poll.