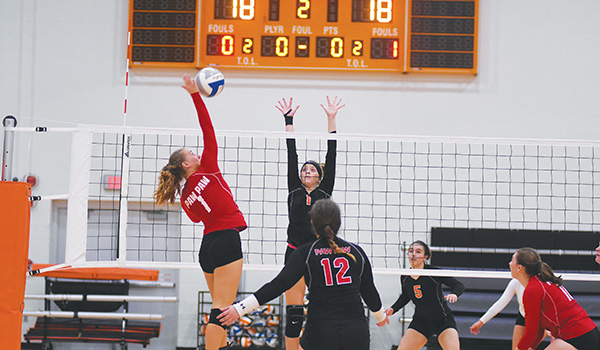 EDWARDSBURG — “Our team is all about runs,” said Edwardsburg junior setter Emma Strefling after the Eddies defeated the visiting Dowagiac Chieftains in Wolverine Conference action on Tuesday night.

“The team likes the way that I communicate with them throughout the game,” Strefling said about her vocal leadership. “I’m quick to pick a teammate up if she makes a mistake, and I can tell confidence builds. We bounce a lot of energy off each other.”

“[Strefling] is such a knowledgeable player,” said Edwardsburg Coach Nikki Bush. “She sees the floor well, making smart setting decisions and getting her teammates in the best positions.”

The volleyball knowledge comes from a successful family line of volleyball athletes and coaches. Father Vince Strefling is the current Glen Oaks Community College coach, and older sister Franki Strefling is enjoying a strong career as an outside hitter at Eastern Michigan University.

The Eddies had a comfortable lead throughout the first set. Strefling had 11 assists to help get her team in the driver’s seat early.

“We came out on fire to start,” Bush said. “We are a good enough team to get us out of those tough situations.”

Dowagiac (10-9-1, 2-3 Wolverine Conference) woke up in the second set, jumping out to an 11-7 lead and forcing the Eddies to call a timeout.

“Once we got into the offensive groove, we started putting things together,” said Dowagiac Coach Tony Hooley. “Even though we lost, it’s one of the better games we have had in the past couple of weeks, especially against a ranked team.”

With the third set going back and forth, Strefling was able to rattle off a couple of points during her serve to give the Eddies a 17-14 lead. The Eddies finished strong and won the final set 25-17.

“We focus a lot on serving,” Bush said. “But we focus more on aggressive serving to get us points and knock out some of the bigger teams.”

Strefling trains year-round for the sport, which she keeps close to her heart.

“Since the first day I could walk, I’ve been passing, setting and practicing my approach,” Strefling said. “At first I was a little rocky, and I didn’t know if I wanted to play volleyball because I liked playing soccer as well. But once I fell in love with volleyball, my focus went to that full-time.”

Dowagiac was led by Nicole Whan with 19 assists, Megan Davis with seven kills, Jenna Davis with two aces, Allie Connor with eight digs, and Riley Stack with a block.

Edwardsburg will face Plainwell at home, and Dowagiac will travel to Otsego tonight as both teams continue their Wolverine Conference schedules.

PLAINWELL — A delay of nearly 24 hours was not enough to keep visiting Dowagiac from improving its Wolverine Conference... read more