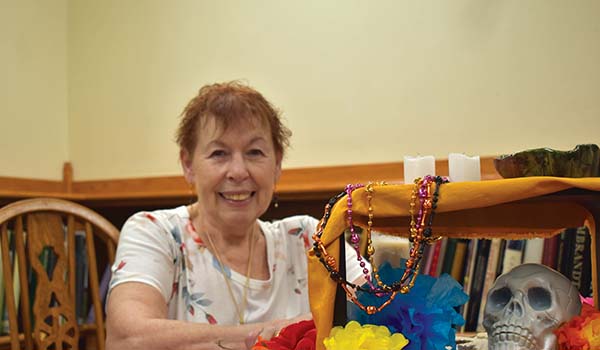 BUCHANAN — On top of a bookshelf at the Buchanan Art Center’s Hess Memorial Library is a display for the dead. It is wrapped in fabric and decorated with Bob Dylan records, Charles Bukowski books, a pack of Marlboro cigarettes and a bottle of Dewar’s Scotch whiskey.

The display is the first ofrenda, meaning offering in Spanish, of Buchanan Art Center’s Celebración de Día de los Muertos, known in English as Day of the Dead, a Nov. 2 event celebrating the lives of friends, family, famous figures and pets that have died.

The ofrendas the art center will showcase are displays meant to remember, celebrate and welcome a dead person or animal to the living world.

Buchanan area community members are able to create their own ofrendas by using free crafting supplies and their own personal items. Once made, ofrendas will be displayed at the center’s library until a 2 to 6 p.m. celebration Nov. 2 at 117 W. Front St.

Marjorie Trapp, president of the center’s board of trustees, said this is the second time the organization has hosted the event.

“It sounds so dire if you lived in a totally European community, and you had told people you were celebrating the Day of the Dead,” she said. “‘What? What?’ That was kind of my reaction the first time I heard of it when I was teaching in California.”

The event was brainstormed by director Danielle Wilborn as part of a two-fold mission: to provide more multicultural exhibits and opportunities, and to make all people feel more welcome at the center.

Trapp said she appreciates the missions of the center and the person behind them. She said that by providing multicultural experiences and experiences outside of what people traditionally believe as art, appreciation for art and culture increases.

She recalls an event last summer at the Buchanan Art Center, where musicians from Indiana University South Bend and St. Mary’s College came and played classical music. The genre is typically associated with the upper class, but it made her think back to when she was a young girl listening to classical records on her parent’s Victrola.

“If I could’ve come here and [saw] the instruments playing, oh my gosh,” she said. “I was not a rich, educated, snooty person. I was just a little farm girl. You never know who you’re really going to reach out to or who really needs to hear from you.”

Events such as Celebración de Día de los Muertos are meant to create those experiences.

The celebration will include Hispanic food, music, sugar skulls and craft activities. Its main draw, however, will be the ofrendas.

Trapp said the process of making an ofrenda is easy but meaningful.

Placed next to the Dylan-Bukowski ofrenda in the library is a packet featuring ofrendas from last year. Many of the items displayed were visual, such as Valentine’s Day cards and varsity letters, but others elicited taste, such as favorite snacks.

Trapp intends to make the most of Celebración de Día de los Muertos. She even plans to create an ofrenda herself.

Those unable to make an ofrenda or attend the event have other chances to attend multicultural programs at the Buchanan Art Center.

Trapp said plans are in the works to host a second annual Chinese New Year celebration. Last year, pigs were brought in to celebrate the Year of the Pig.

The animals for the upcoming Year of the Rat may be easier to coordinate, she said.

DOWAGIAC — The search for the next president of Southwestern Michigan College continued Tuesday as candidates were interviewed on the... read more