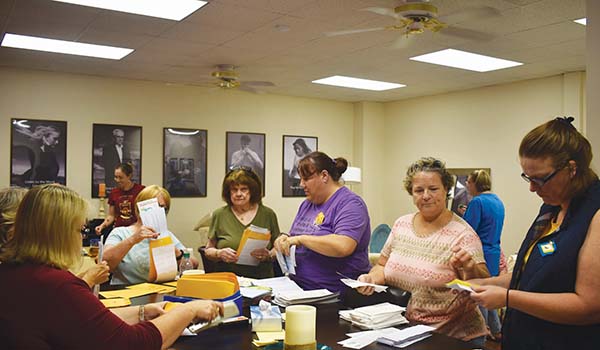 Meet the organization behind the Apple Festival’s pickles

NILES — The Four Flags Area Apple Festival may be best known for the fruit in its name, but the women of Psi Iota Xi’s Zeta Theta chapter have made pickles an infamous food at the festival over the past decade.

When attendees entered the arts and crafts vendor section of the fair this past weekend, they were greeted by the women of the service organization, which hosts the arts and crafts, and their pickles — 80 gallons of them if someone stopped by early enough.

Psi Iota Xi sold the pickles and gave all profits to the numerous area charities it supports. The total donation amount was still being calculated at the time of publication, but its weekend earnings will add on to the $14,000 raised so far this year.

The idea to sell pickles came about in an attempt to set Psi Iota Xi apart, said Lesley Bookout, a 52-year member of the Niles chapter.

“Somebody in the program had the recipe originally, and it was unique and was relatively simple to do and was something that nobody else was doing,” she said. “Everybody else was doing cheese balls and selling flowers.”

Members would not share their recipe, but they did share their pickles’ informal slogan: “Sweet with a little kick at the end.”

Psi Iota Xi was founded by a group of Muncie, Indiana high school girls in 1892 who wanted to help the arts. Their mission has stayed the same and has since spread to 139 chapters in five states since.

Bookout said her organization’s focus on art has taken special importance as of late, as some school districts across the country cut or stagnate arts funding.

“Once they stopped doing it in schools, we felt that there was a need for it, and we were amazed at how many areas [there were],” she said.

Service extends past the arts, too. Members have raised funds for the Hunter Ice Festival in Niles, Ferry Street Resource Center, a center for grieving children and the Great Lakes Burn Camp.

President Tricia Bookout said her mother-in-law, Lesley Bookout, drew her into Psi Iota Xi, but its service focus has kept her part of it. She particularly enjoys getting together with other members and purchasing Christmas items for low-income families.

Lesley enjoys the sisterhood that the sorority-turned-women’s organization brings.

“A lot of what we do, why we belong, is a sisterhood,” she said. “It’s a chance to meet and visit with women outside of your job, outside of being a mother. You get to have adult conversations with women, and you know that what you do does great good in the community. It’s very satisfying.”

Women interested in joining Zeta Theta chapter can call Lesley directly at (269) 591-0265 or by emailing her at lesley.bookout@att.net.

CASSOPOLIS — A Jones man who nearly killed his girlfriend last October was sentenced to 15 years in prison Friday... read more