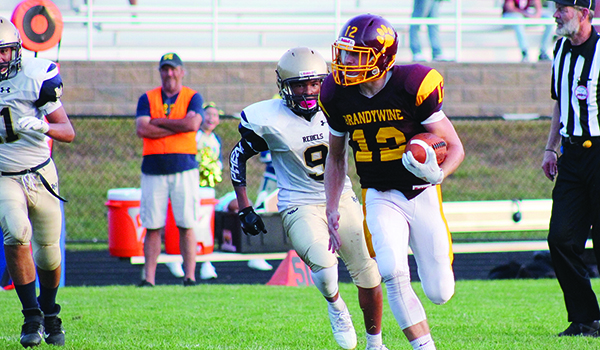 Bobcats rout Fennville to move to 5-0

Thunderstorms began rolling through southwest Michigan around 5 p.m. and did not move out of the area until early Saturday morning.

As a result, Brandywine, Buchanan, Cassopolis and Dowagiac were all forced to move their games to Saturday.

Edwardsburg was also going to play on Saturday, but South Haven, who is leaving the Wolverine Conference after this season to join the BCS Athletic Conference, decided it would forfeit to the Eddies instead of returning the next day.

Brandywine traveled to Fennville Saturday afternoon and routed the Hawks 55-7 to improve to 5-0 on the season.

Buchanan picked up its first victory of the season as it defeated Parchment 34-15 on Saturday, while the Chieftains traveled to Plainwell and knocked off the Trojans 25-14.

Cassopolis gave up its first points of the season, but still won 33-11 to improve to 5-0.

On Thursday night, Niles lost to host Gull Lake 12-10. The game had to be moved from Friday as a result of a Luke Bryan concert at a farm in Richland.

Complete results from Buchanan, Cassopolis and Dowagiac were unavailable at press time.

Gabe Gouin had a huge night for the Bobcats as he was 6-of-13 for 161 yards and three touchdowns, while he also rushed for 92 yards in a score.

Gouin threw all three touchdown passes to Shane Brown, who finished the night with five receptions for 156 yards.

On defense for Brandywine, Brock Prenkert and Connor Janowiak both finished with 10 tackles. Michael Palmer had a fumble recovery, while Abrams intercepted a pass.

Brandywine finished the night with 487 yards of total offense, including 326 on the ground.

Drew Gourlay kicked a 21-yard field goal in the first quarter, and Nate Goins hauled in a 51-yard touchdown pass from Brayden Lake in the Vikings’ loss at Gull Lake.

Niles is now 1-4 on the season. The Vikings host Portage Northern Friday night.

EDWARDSBURG — When Edwardsburg seniors Jocelyn Hack and Skyelar Burlingham are on the court receiving sets from junior Emma... read more