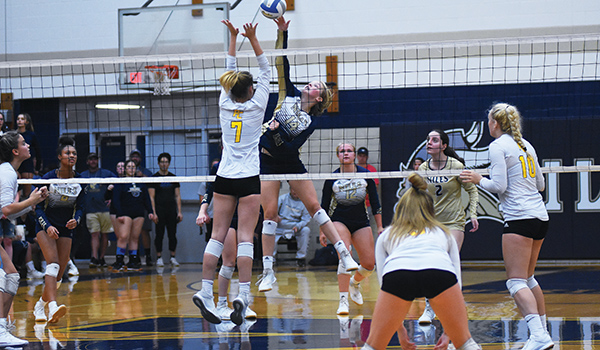 NILES — As in any sport, an injury can change the complexion and chemistry of a team.

In some sports, you can overcome an injury by shifting a player into that position without skipping a beat.

In other sports, like volleyball, an injury to one player can affect the entire team.

Such is the case with the Niles volleyball team, which lost Marika Ruppart to an ankle injury at its last tournament. Ruppart was in street clothes and on crutches when the Vikings hosted SMAC West Division powerhouse Portage Central Monday night.

Niles coach Jenny Nate worked with her team on Monday and Tuesday to prepare for playing without Ruppart, but practice is different from games.

“With one of our middle blockers out with an injury tonight, we worked hard the past two days shifting players around to try and prepare,” she said. “It was tough to really get runs going. We would make some really good plays but then lose momentum. Then, we would catch back up in certain rotations only to fall behind again.

“We had a lot more errors than we normally do, and our energy was a little off. That being said, the team kept their composure and worked hard to get some plays going. We have to be able to consistently put the ball away in all of our rotations and stay aggressive at all times.”

Despite the injury and being out of sync much of the night, the Vikings were still right there against the Mustangs, losing 25-19, 25-19 and 25-18.

Niles will take the weekend off and start its preparation for Wednesday’s SMAC West Division contest against No. 5-ranked Mattawan.

“One of our main goals at practice this week is getting balanced scoring from all of our hitters,” Nate said. “The positive side of a night like this is that it gives every player a chance to get court time and really work together as a team, and we have something to learn and take away from every match, especially the tougher losses.”

NILES — Over the past 48 hours, Niles athletic coaches have had to get used to the fact that beginning... read more