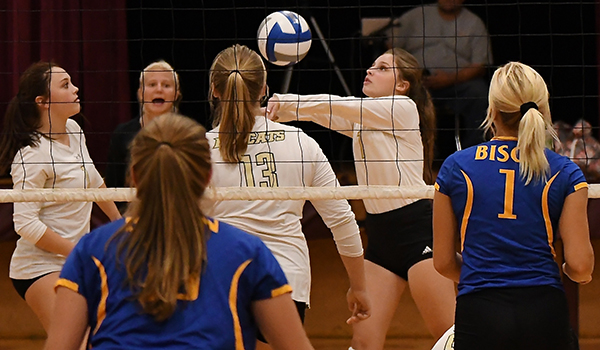 NILES  — Ray Prestly, in his first year as head coach of the Brandywine varsity volleyball team is already setting an honest example for his team.

It took Brandywine four sets to defeat BCS Athletic Conference rival Parchment, 3-1 in a match on Wednesday night. Brandywine defeated Parchment, 25-13, 25-18, 19-25 and 25-23. With Parchment gaining a single win in the third set.

During a match, Prestly is the kind of honest coach one would see going against the call of a line judge that ruled in his favor, by telling the referees that Parchment’s hit was actually in.

He is also the honest kind of coach that will admit his team is dealing with injuries and sickness after junior Kylie Myers suffered a slight concussion and senior Bethany Duval is in her second week back after an ankle injury.

“Were in kind of a bump,” Prestly said. “We are trying to find our identity. We know who we are. We are not meshing together right now.”

Prestly said once he gets the team healthy, things are going to start clicking. With Myers out, the team looked to junior Riley Crofoot to fill its middle hitter position.

Prestly said Crofoot’s performance in the game proved how well the team can step up when needed.

“Riley, she stepped up and went for it and had an awesome performance tonight,” he said.

Crofoot, who usually plays as a right-side hitter for Brandywine, played the position of middle hitter for the first time ever on the court against Parchment.

During the first two games, Crofoot, racked up kills and helped block alongside teammate Elizabeth Stockdale.

“The timing on the hitting is really different with the sets and stuff,” Crofoot said of having to adapt to the middle position. “There’s like quicks and it’s just hard.”

Alongside Crofoot, Duval contributed a number of kills throughout the night from the back and front row, to help Brandywine defeat Parchment in three sets. Prestly said Duval’s return is coming along.

With changes to formations happening, Prestly said he thinks the team needs to work on adapting when playing next to different teammates or in new positions.

With the third game loss, Prestly contributes it to the team’s overconfidence.

“We were not executing and we were not taking care of things on our side,” he said. “That’s the biggest thing, we kind of seem to step outside our process of doing things and start looking at the outcome before we really need to.”
To combat a loss of focus, Prestly said he is always reminding the Bobcats to get back into the process.

Along with getting healthy, Crofoot said the team needs to work on communication and its setting — but the chemistry is solid.

“We all know each other and I played club with a couple of the other girls on the team, so I think we all get along,” she said.

NILES — Although Abel Fonseca’s first season as Niles boys soccer coach is not going according to plan as far... read more