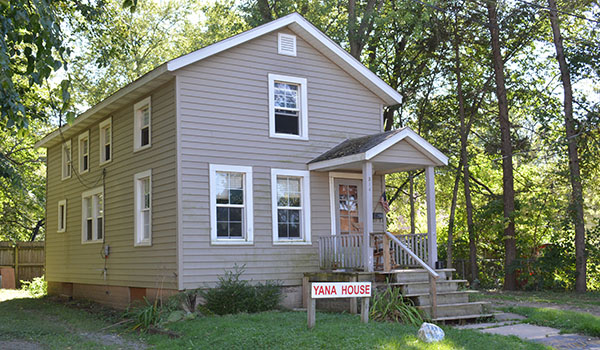 Yana House in Niles, a building that hosts Alcoholics Anonymous meetings, is set to close at the end of the month. (Leader photo/SARAH CULTON)

Yana House set to close at the end of month

NILES — A house that has helped many turn to sobriety over the last two decades may be leaving Niles for good.

Yana House, a house on Eagle Street in Niles that has hosted Alcoholics Anonymous meetings twice a day for more than 20 years, is set to close at the end of the month after the man managing it moved out of the area. Now, those closest to the house are looking to the community, hoping that a leader will step up to keep the house and its meetings running in the Niles area.

“This has been a great asset for the community. It has served the community very well,” said Doug, a man closely associated with the house and who asked to be only referred to by his first name in order to preserve the anonymity assured by Alcoholics Anonymous. “Now, long story short, it is basically going away. I don’t want that to happen.”

Yana House was started in the late 1990s by Doug’s father, Don, an Edwardsburg pharmacist, and several other founding members, most of whom were recovering alcoholics. Though Don died many years ago, Doug said the house had remained a non-judgmental, non-religiously affiliated meeting space that has helped many individuals get sober, including his own father.

“Yana House was key in [my father] getting sober,” Doug said. “I’ve seen a lot of people come through there. … It’s a place where people can go, without judgment, to get the help they need.”

Dave, one of the original founding members, ran the house until he recently moved north after the death of his wife. He said he and the other founders started Yana House because they saw the need in the community. Over the last 20-plus years, he said he has seen Yana House fulfill that need.

“We needed to have a place to have meetings, and we wanted to have something in town,” Dave said of why Yana House was started. “It has helped people to get sober.”

Doug, who has been sober for three years, said he considered buying and taking over Yana House, but ultimately decided it was not the right thing for him to do at this time. However, he said he still believes that Yana House needs to remain in Niles — both for the benefit of the community and to honor his father’s legacy.

“It really needs to keep going,” Doug said. “You know, my sponsor asked me if I was doing this to protect my father’s legacy and if there was some romanticism there, and yeah, I think there is a little bit of that. But also, this has just been a great asset to the community. It’s a really great program that has helped a lot of people. … Without it, it’s going to create a huge void.”

Dave agreed he would like to see new leadership take over Yana House to allow it to continue helping people tackle their addictions in the greater Niles area. Both Dave and Doug said they would hope a community member would step up to take responsibility for allowing Yana House to continue, which would include finding a new building for its meetings to be hosted in.

“It needs to find a new place, a new building,” Doug said. “There needs to be some leadership to find that new place. It can’t just be any place. It has to be a place that is OK with smoking and can handle a bunch of people — people with addictions and stuff like that. I’m hoping that someone will read this and go ‘oh, I’ve got that space.’ The community needs to know that this is going away, it needs a place to go and there is an opportunity to save it.”

NILES — In the past, Lydia Farmer and her family struggled financially and had to rely on organizations when they... read more