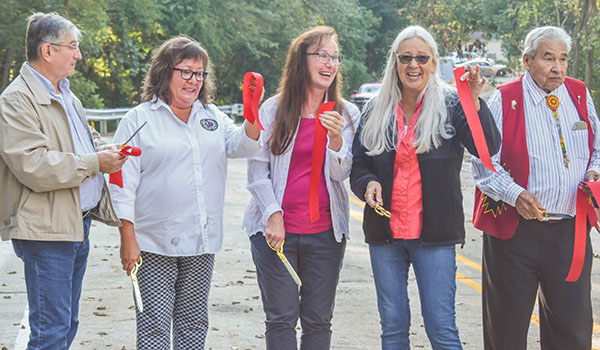 Leaders from Pokagon Band hold up pieces of the ribbon after they cut it to celebrate the opening of the Sink Road Bridge. (Leader photo/HANNAH HOLLIDAY)

DOWAGIAC — Bridges are known for connecting people, and on Tuesday, leaders from the Pokagon Band of Potawatomi Indians stood connected with officials from Pokagon Township and Cass County to officially open Sink Road Bridge.

The completed bridge over Dowagiac River at Sink Road and Edwards Street was dedicated and unveiled at a ribbon cutting ceremony attended by leaders from the Pokagon Band, Pokagon Township, Cass County and the Michigan Department of Transportation.

The Sink Road Bridge took more than a decade and a half of planning, said Becky Richards, the assistant government manager of the Pokagon Band.

The bridge, which had been under construction since May 28, is opening two weeks ahead of schedule, Richards said, and involved the collaboration of several government agencies.

“It is many years in the making,” Richards said. “For at least 15 years, we’ve been planning and trying to get this project completed. I am just so excited, and I feel like we finally accomplished a big undertaking and multiple ­— agency project with all the partners we had.”

White used sage to smudge each attendee at the dedication.

“We usually do this when we have our ceremonies,” White said. “This is a monumental moment for everyone here, especially the ones who come down this little road down here.”

After the prayer, Jeff Winchester honored the event with a song he sang and performed with a hand drum.

Matt Wesaw, chairman of the Pokagon Band of Potawatomi Tribal Council, said the project exemplified how government-to-government relationships can result in projects like the Sink Road Bridge.

Wesaw said the total cost of the bridge was $1.6 million, and through the Bureau of Indian Affair’s tribal bridge program, the Pokagon Band was able to contribute more than $750,000 towards the project.

“This project was a win-win for all parties,” Wesaw said. “The band’s funding paid for much of it. Public safety is improved and the community will have a safer, more convenient canoe launch with dedicated parking and rustic restroom facilities.”

Wesaw said he personally valued the relationship he has developed with Pokagon Township officialsthrough the project.

“It’s a great working relationship,” Wesaw said. “We do a lot of things. We support each other, and it’s just a real pleasure and privilege to have that relationship with all of you.”

Joe Bellina, from the Cass County Road Commission, also echoed sentiments of the project being a long-time coming.

“Personally, I would like to thank Pokagon Band for 15 years of effort,” Bellina said. “It’s hard to say that. At the same time, I think it speaks very well of our relationship — ongoing.”

Pokagon Township Board of Trustees Supervisor Linda Preston also spoke at the dedication and expressed how the Pokagon Band coming to Pokagon Township has offered the township growth and a variety of opportunities.

“Becky [Richards] and I became friends years ago as we began working on road projects,” Preston said. “We began that bridge project, and I was there at the beginning of that. At a couple points we thought, ‘maybe it’s not going to come to fruition.’ We never gave up.”

To end the dedication, members of the agencies involved stood next to leaders of the Pokagon Band in front of a red ribbon to officially open Sink Road Bridge.

“It feels so good to get this across the finish line,” Richards said. “Many people use this bridge servicing the band, mostly. I know our team members will be happy to be able to open up this route this morning.”

NILES — In the past, Lydia Farmer and her family struggled financially and had to rely on organizations when they... read more