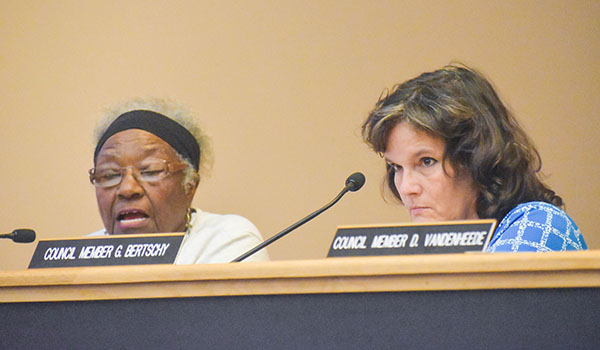 NILES — Whether Niles City Council decides to allow recreational marijuana businesses in city limits in the coming weeks or not, the results of Monday evening’s meeting at the Niles Fire Department Complex moved the city closer to tightening wording meant to ensure proper marijuana business regulation would take place.

The council approved a special meeting at 6 p.m. Monday, Oct. 7 for a second reading of two ordinances that would allow regulated recreational marijuana businesses in city limits. The council could then vote on whether to adopt the two ordinances at that same meeting.

If the council votes and does adopt them, recreational marijuana businesses could take steps through the city to obtain local licenses after they obtain state licenses beginning Nov. 1.

If the council votes not to adopt the ordinances, then the council may move forward with two amendments to two current ordinances that prohibit recreational marijuana businesses.

The amendments were proposed by councilmember Daniel VandenHeede at the council meeting and approved unanimously by his fellow members.

His proposal would amend current wording to ensure all recreational marijuana businesses are kept out of the city. Its second hearing and potential vote will be at the same Oct. 7 special meeting.

VandenHeede said he proposed the amendments to protect the city. He said it would act as a buffer in the case that the council decides to wait to vote on marijuana businesses until a date weeks or months away.

“We have options, and we’re in not so much pressure here,” he said. “I encourage everybody to really go through this ordinance and bring their considerations again. I know there might be some frustrations by the business owners here… but this isn’t something I think we should take lightly or rush through.”

She also explained her longtime stance against marijuana of any sort. She said it was because many of the crimes that have occurred in Niles in her two decades as a councilmember had their roots in drugs.

“I had to watch a mother lose her only son,” Boggs said. “Yes, life does matter to some people. When we start going into these things, we need to take our time.”

However, Mayor Nick Shelton and City Administrator Ric Huff noted there is pressure to get a vote on the floor by Nov. 1. If the council fails to do so, the state of Michigan would begin to accept recreational marijuana licenses for businesses, and the city would not have a clear stance on whether it would accept such businesses or not.

“If we don’t have something on the books by that time, we don’t know what’s going to happen,” city attorney Robert Landgraff said. “This is not a rush by the city to enact something. It’s not a rush to get involved in marijuana activity. It’s a rush to get something to protect the city’s interests.”

Seven Niles residents and marijuana entrepreneurs came to speak about the proposed marijuana ordinances. Three speakers were opposed to their passage, and two asked the council an exact date of voting.

Shelton said he could not determine when.

Cydney Harris, of Niles, was one of those opposed.

“Recreational marijuana will not add value to the city of Niles or its citizens,” she said. “I do have concern, also, about the zoning ordinances and the places those will be located. We have concerns about maintaining the current standards of our neighborhoods.”

Some appointed and elected officials reminded each other and audience members multiple times through the night that recreational marijuana can already be consumed in many private residences and carried in limited amounts in public per state law. The proposed ordinances allow a set number of businesses to grow, process and distribute recreational marijuana within city limits. Each would be regulated and restricted.

Despite the focus on marijuana, many other items at the meeting were presented and unanimously approved. They included the following:

• The purchase of five breathing apparatus bottles for the fire department, budgeted at $5,805.

• The purchase of 13 mobile printers for police officers to process data in their vehicles, budgeted at $6,540.

• A $17,900 quote for wet well cleaning and grit removal at the wastewater treatment plant.

•.An expense budget of $3,148,766, which is comprised of city departments’ best estimates of fiscal year costs.

Yana House set to close at the end of month

NILES — A house that has helped many turn to sobriety over the last two decades may be leaving Niles... read more