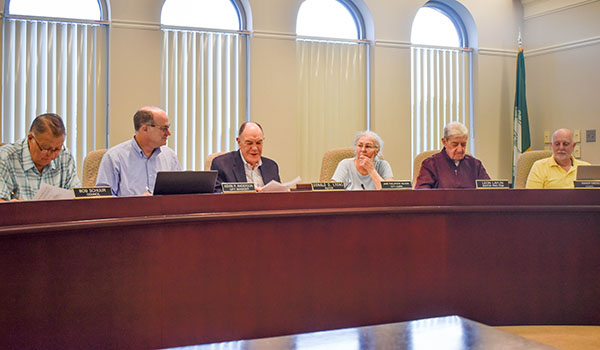 At the Dowagiac City Council’s meeting on Monday night, three new appointments were made for members to join the Downtown Development Authority. (Leader photo/HANNAH HOLLIDAY)

DOWAGIAC — The Downtown Development Authority will welcome new faces after the Dowagiac City Council approved three new business owners to its board at its Monday night meeting.

The Downtown Development Authority was created by the city of Dowagiac in 1986 to focus on growing the downtown.

• An event request by the city council to allow fireworks at the Dowagiac Union High School homecoming parade. No concerns were raised by councilmembers.

• A resolution to authorize the Class and Compensation Schedule for non-bargaining employees for the 2019 and 2020 fiscal year was unanimously passed by the city council.

City Manager Kevin Anderson shaved the city’s fiscal condition and what inflation rates regularly are. A 2 percent increase was deemed appropriate to adjust the scale. Anderson added there is room within the scale to move, based on performance activities and reviews.

• A resolution to finalize budget amendments for the 2018 and 2019 fiscal year ending on Sept. 30. Anderson said, overall, with the final budget amendments, funds are going to see an improved fund balance. Utility increases were made due to capital projects that are now in the works.

“Overall, this is one of the more solid budget amendments that we’ve seen with a positive fund balance,” Anderson said.

• A resolution to authorize an amendment to an agreement with F&V Operations for the operation and maintenance duties of the city’s wastewater treatment plant.

F&V Operations was brought in three years ago by the city to take a leadership role to ensure the city stayed compliant with various permits within the wastewater treatment plant.

F&V Operations kept two employees on staff and the city of Dowagiac had two employees. After the retirement of one of the city’s employees this year, the city approved that F&V Operations hire a new person in the role. Anderson said the city sat down with a union representative unit to work through how the city could make sure there would be no loss of jobs. At the same time, there was a vacancy for a position in the public works department.

“This amendment now puts F&V Operations in charge of operations, maintenance and all the employees at the wastewater treatment plant,” Anderson said.

The city has two and a half years left on its contract with F&V Operations.

• A public hearing date set for 7 p.m. on Oct. 14 to discuss the proposed Dowagiac Park and Open Space Plan.

During councilmember questions, councilmember Patrick Bakeman asked if the old Gray Street site could be added to the discussion. Anderson said it would be a worthwhile conversation to have included in the recreational plan.

“When we first took the building down we weren’t sure where it would lead,” Anderson said. “Whether that would be for rail access there, that doesn’t seem to be anything to consider.”

• A resolution to authorize a special assessment in alignment with the Dowagiac City Code for the purpose of abating deteriorating property conditions. Mayor Donald Lyons said the resolution is a routine item but pertains to both structures and ground maintenance.

It was also announced by Anderson that construction had begun on Schuur Park, located at Cass Avenue and Dowagiac Creek.

DOWAGIAC — Bridges are known for connecting people, and on Tuesday, leaders from the Pokagon Band of Potawatomi Indians stood... read more