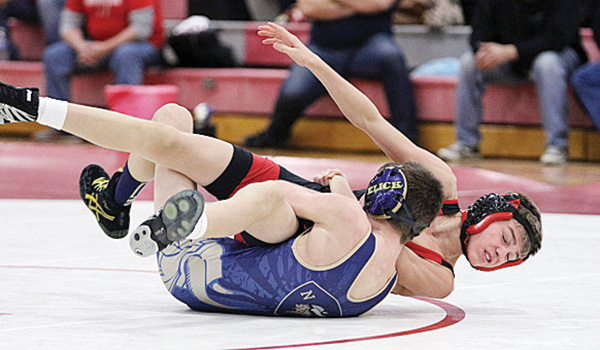 Where are they now?: Niles’ Flick remembers his time on the wrestling mat

It is a moment, Flick still looks fondly back on today, after he set a new mark for the Niles wrestling program. That same year, Flick set a new school record with more than 150 career wins and as Niles’ all-time pin leader with more than 100 career pins.

Flick attended Niles High School from 2013 to 2017, leaving the school for a brief time during a family move to Tennessee, but eventually moving back and re-integrating back into the program.

“I would say my favorite memory was senior year, when Niles beat St. Johns at team states,” Flick said about his past athletic career as a Viking. Another meaningful memory in his career was earning all-state his freshman year.

After graduating, Flick said he still remains in contact with past teammates and finds time to get together. He is also trying to attend more wrestling events, as he still lives in the Niles area.

“I’d like to start going to some more practices and supporting at some more tournaments,” Flick said.

Since leaving the mat, Flick works an apprenticeship through the Local 172 Plumbers and Pipefitters Union at the D.A. Dodd, which he has been doing for the past three months.

Flick, who said he first got into the sport through his step-dad, who is always supporting him, had a 10-year wrestling career and spent his summers working hard on the off-season to attend camps and improve skills in the sport. Under the guidance of Nile’s wrestling coach, Todd Hesson, for four years, Flick saw Hesson as a role model for the athlete he turned into.

As Flick put lots into his athletics, he encourages future athletes to do the same.

“Work hard every day,” Flick said. “Make the most out of it because it flies by.”

Outside of his dedications, Flick has always loved being outdoors and fishing and continues to be active.