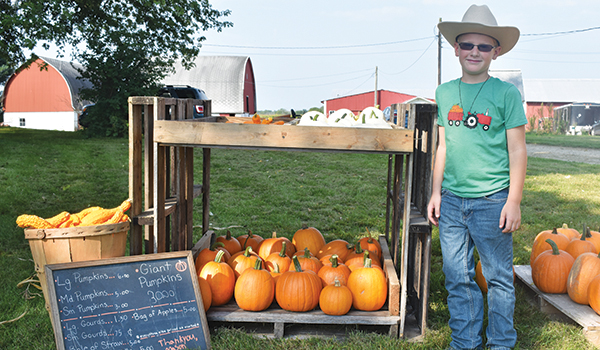 Mason Ausra is in his third year of running his own pumpkin stand. Ausra purchases his own seeds, signs and takes care of his pumpkin patch with limited help from his parents. (Leader photo/HANNAH HOLLIDAY)

DOWAGIAC — At just 8 years old, Mason Ausra might have a better understanding of budgeting and profit than most children his age.

This is Mason’s third fall selling pumpkins at a farm stand located outside of his home, at 56450 California Road, in Dowagiac. He is selling his pumpkins at 10 a.m. on Saturdays until Halloween or when he sells out — whichever comes first.

Mason’s parents, Kristin and Andy, tried to do a pumpkin stand when Mason was young. One year, they asked if he wanted to help, and from there, Mason took over the operation.

Mason, who is a third-generation farmer, runs 90 percent of his own pumpkin stand. His first order of business is to pick out seeds from a catalogue and purchase them.

He plants the pumpkin seeds in late spring or early summer and takes care of them throughout the season. He will pick the pumpkins for his stand between September and October.

“I weed them and water them,” Mason said.

This is the first year Mason grew the pumpkins directly behind his house. The past two years, the pumpkins were grown in a field, which meant he needed someone to drive him there after school, where he would spend an hour or two.

This year, Mason can go out to the field whenever he wants and is able to transport wagons filled with pumpkins all by himself. Transporting the pumpkins with a four-wheeler is one of his favorite parts of running his own stand.

Mason said he feels good when he sells a pumpkin to someone. To learn more about budgeting, he wants to use the money he raises towards purchasing a car, house and farmland once he is older and has saved enough. He also said he might be interested in using the money towards college.

While farming is in Mason’s blood, he still had some learning to do, including researching how multiple factors can affect the growth of his pumpkins.

“Like giant ragweed, it’s a weed that grows taller than that corn,” Mason said. “If you just keep letting it grow, it kind of takes over. There is not really a spray for it, so you kind of have to pull it out. Sometimes you can kill it when it’s tiny with spray, but when its big, you can’t really.”

Kristin said pumpkin growing this year has had its challenges, as the summer was cold and spring had a high amount of rainfall.

“We’ve learned a lot about weather and how it affects our crops,” Kristin said.

Last year, Mason grew more than 800 pumpkins. This year, he only has about 300 pumpkins to sell.

“A bunch of other pumpkin farmers didn’t have any good luck with their pumpkins,” Mason said.

With more than 300 pumpkins to look through and take care of, Mason said he sometimes stumbles upon his “favorite” of the patch. This year, he has found two gourds stuck together and an apple pumpkin. Last year, he grew a pumpkin that weighed more than 200 pounds, which he decided to keep.

Through selling his pumpkins, Mason has met members of the community and also interacted with local businesses. He has sold his pumpkins at the city of Dowagiac’s Farm and Artisan Market on Saturdays.

Leading to Mason’s pumpkin stand is a trail of orange signs that read, “pumpkins,” which help draw people to the stand. He purchased the signs with his own money from Creative Vinyl in Dowagiac.

“We try to support other businesses in Dowagiac with what we are doing here,” Kristin said.

Next to Mason’s pumpkin stand sits another table with pears, Brussels sprouts and apples. The Ausra family partnered with Disterheft Farms in Eau Claire to help their 4-year-old daughter, Addy, run a stand of her own and learn similar business skills as Mason.

“She really wanted to take part in something and being four is hard in the pumpkin business,” Kristin said.

By HANNAH HOLLIDAY hannah.holliday@leaderpub.com DOWAGAIC — The smell of pancakes and sausage filled the air as the Dowagiac Fire... read more