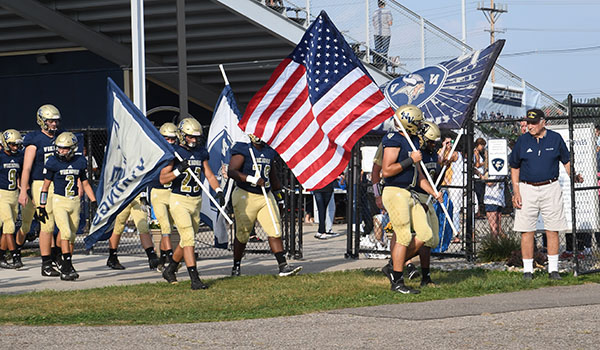 Niles High School announced Tuesday is was leaving the SMAC after this season to join the BCS Athletic Conference next year. (Leader photo/KELLY SWEENEY)

NILES — The days of long bus rides on a school night that would return a Niles High School sports team from Kalamazoo or Battle Creek between 11 p.m. and midnight appears to be over.

Niles Athletic Director Jeff Upton announced Tuesday afternoon that the Vikings would be leaving the SMAC conference at the end of the 2019-20 school year to join the BCS Athletic Conference beginning next fall.

“We expect to receive South Haven’s formal letter within the next 24 to 36 hours,” he said.

They were two of 10 teams that the BCS sent membership invitations to earlier this year. The list also included Dowagiac, Allegan, Martin, Bangor, Coloma, Watervliet, Marcellus and Eau Claire.

Dowagiac, like South Haven, is a member of the Wolverine Conference, while Marcellus and Eau Claire are currently members of the Southwest 10 Conference, which includes Cassopolis.

All have turned down invitational so far.

Football continues to be the driving force in conference realignment.

Peters stressed that football is not the only high school sport, but until the Michigan High School Athletic Association fixes its playoff system to allow all teams to participate, conference shifts and realignment are to be expected.

For now, the BCS is looking to strengthen its football numbers.

After combining for a season, Bridgman and New Buffalo switched the eight-man football this season.

River Valley recently canceled the remainder of its football season. It is unknown if the Mustangs will also switch to eight-man next season.

With the addition of Niles and South Haven, which have enrollments of 856 and 663 respectively according to the 2019-20 MHSAA enrollment figures, the Vikings and the Rams will vault to the top of the league.

At the other end of the spectrum, New Buffalo has 178 students in its high school.

The schools that were invited to join the league would have similar numbers both at the top-end of the scale, as well as, the bottom end.

Upton has been advocating for Niles to leave the SMAC for several years now with the purpose of cutting down travel, being more competitive in all sports and to belong to a conference that included Dowagiac.

For now, he may have to focus on lining up a non-conference game the final week of the regular season in 2020.

“We notified them last August,” Upton said. “We did not know where we were going until today. We made many attempts to change our situation in the SMAC and they all went by the wayside and we made many attempts to find a conference where we would be a good fit. Our No. 1 goal always has been to be in a conference with Dowagiac. The record will show that.” I am not going to give up hope on that.”

Among the benefits of joining the BCS according to Upton is cutting down on travel. Long bus rides on school nights to Kalamazoo and Battle Creek were taking their toll on the student-athletes, who would get back to the high school late.

Those bus rides now will be to Buchanan and Brandywine. To Bridgman New Buffalo. The longest trips of the year will now be cut down to South Haven and Comstock.

“We accepted the invitational formally this morning and they did a vote and voted us in,” Upton said. “It is my understanding that South Haven is leaving the Wolverine and joining us in the BCS. The advantage is our kids are going to be in school longer. They are not going to be pulled out of class to go to a game in Gull Lake or Battle Creek Central at 1:15 p.m. in the afternoon. They are not going to be getting back home on a school night at 11:30 p.m.”

Upton is also pleased that local rivalries can be rekindled or created due to the closeness of all the schools.

“The kids are going to be playing against kids they have grown up with,” he said. “It is going to bring the fun back to sports no matter what night it is.”