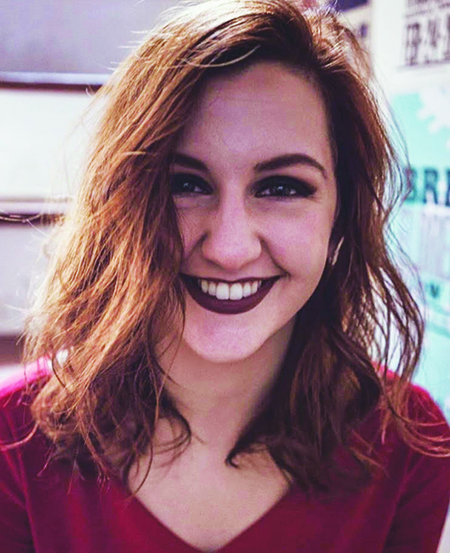 DOWAGIAC — Being accidentally put in choir at Dowagiac Middle School was what Nashville singer and songwriter Lunchbox Rachel considers the best mistake to ever happen to her.

Rachel McLaughlin, a singer and songwriter in Nashville, Tennessee, will be returning to her hometown of Dowagiac for an album release party for her new EP, “Night Swim,” at 7 p.m. Friday at The Strand, 93415 County Road 690 in Sister Lakes. Merch with Lunchbox Rachel, McLaughlin’s performance name, will be available as other bands will also be in attendance.

Although McLaughlin said she was musical as a child, she did not start singing until she experienced a classroom structure. Jeff Robinson, who was the choir program director and instructor at Dowagiac for many years, got McLaughlin hooked on music, art and creative thinking. From there, her love for singing and songwriting blossomed, she said.

Singer and songwriter Rachel McLaughlin, who goes by the stage name “Lunchbox Rachel” will host a release party for her new EP, “Night Swim,” at The Strand on Friday. (Leader photo/HANNAH HOLLIDAY)

McLaughlin worked in artist hospitality and behind the scenes gigs in Chicago. She was encouraged by peers in the industry to move to Nashville. After visiting the city for a conference, she decided to take the leap and move after graduating. She has lived in Nashville for more than a year now.

“I just kind of fell in love with the city,” McLaughlin said of her time in Nashville. “It was a perk that there was also the music culture here.”

Her EP, “Night Swim,” is a compilation of three songs. She recorded one in April of this year, a second she wrote a month earlier, and a third was made five years ago.

“The three songs we decided to go with are all kind of similar in style, and I guess you could say genre,” she said.

McLaughlin describes her music as indie blues rock, pulling inspiration from a blend of Billie Eilish and The Black Keys — two of her favorite artists. She strives for a deeper thought undertone in all of her lyrics.

McLaughlin said she does not know what to expect regarding her return to Dowagiac as many different layers of her life will be sitting in one room — old music teachers, high school and middle school friends, friends from Chicago and friends from Nashville.

“It’s just going to be a very complex moment, I guess you could say,” she said. “A beautiful one, nonetheless.”

McLaughlin said she usually does not get nervous for performances, but rather experiences excitement before she performs. She has worked on being comfortable in the element of singing on stage for a long time.

“It gets easier and easier as it goes along,” she said. “It’s also easier to sing your own music than it is to sing covers. In my case, I tend to relate to the lyrics really well, because I wrote them.”

McLaughlin has also performed at The Strand several times in the past and said familiarity with a venue and expectations makes performing easier.

McLaughlin describes herself as an artist who does not shy away from touchy subjects. She has been instrumental within the last couple of weeks creating Invisible Illness Creatives, which is a support organization for creatives affected by invisible chronic illnesses. A pre-existing Facebook page and an Instagram page offer support to these creatives with a variety of illnesses, including Crohn’s disease, diabetes, depression and other invisible illnesses.

“I just had thought to myself, there is not really a public page where people and artists and other creative people have support,” McLaughlin said. “There’s different support groups and stuff, but it’s all very private because people don’t want to talk about it.”

McLaughlin said people can be hesitant to start conversations about illnesses while they are building their business because they do not want it to be the platform of what they are doing.

“I would like to eventually see this little Facebook and Instagram page grow into something much bigger,” she said. “For now, we are just highlighting artists and creative people that have these invisible illnesses by giving them a space to share what they are going through each day, without it having to impact their businesses.”

McLaughlin is looking forward to her performance, the opportunity to see familiar faces and to wrap up the end of summer by sharing her new EP.

“I love music, and it has always kind of helped me,” she said. “It’s kind of the bond that gets me through the rough times in life. I want to provide that opportunity for other people. I’ve just been trying to do as much of that as I can for as long as I can.”