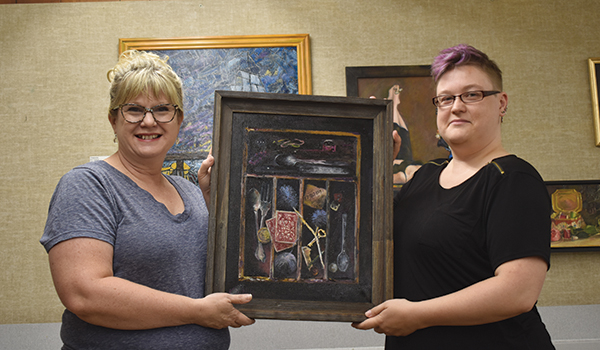 Kimberly DeNolf, left, poses with her oil painting “Treasures,” while executive director of the Buchanan Art Center Danielle Wilborn helps her hold it up. DeNolf’s work will be on display as part of the Northern Indiana Artists’ exhibit “Lost and Found” at the arts center starting this Wednesday and ending Nov. 2. (Leader photo/BEAU BROCKETT JR.)

BUCHANAN — Artwork featuring objects such as broken trees, an old mill’s insides, crows and penguins will be on display from Wednesday, Sept. 25 to Nov. 2 at the Buchanan Art Center, 117 W. Front St. A gallery reception will follow from 2 to 4 p.m. on Sunday, Oct. 6.

The center will host two exhibits by area artists: David Baker’s “Secluded Spaces” in its Roti Roti Gallery, and Northern Indiana Artists’ “Lost and Found” in its Showplace Gallery.

She said it is beneficial for artists, whether they are showcased or not. On the “big end of things,” she said it shows that an art career is possible. On the local end, it gives them a direct outlet.

“A lot of younger artists, they think they have to go to New York or Chicago to get that experience and culture and exposure,” Wilborn said. “Especially with the internet and the whole global market today, that’s not necessarily true.”

Local community members naturally benefit from an art space near them, too, and many Buchanan residents may find a special connection with some of Baker’s watercolor paintings.

A baker’s dozen of Baker’s works are directly inspired from photoshoots he had at Pears Mill a few blocks away at 302 N. Redbud Trail. Out of 13 mills in the area, the 1857 flour mill is the only one that remains.

“If you have work in a venue where the anticipated audience is familiar with what you’re doing or your subject matter, that’s even more fun,” Baker said.

The St. Joseph resident and recently retired Southwestern Michigan College professor of 36 years took photos from his photoshoot and used them as the basis of his paintings. Many of the displayed works feature the inner workings of the now defunct mill.

“I thought about this dimly-lit place and these forgotten spaces, and I thought about Pears Mill,” Baker said. “I was familiar with the mill, and I loved this sort of cavernous old barn that it was in, including the basement. It seemed like a good pairing.”

Paired with his Pears Mill paintings are seven charcoal drawings created for a previous exhibit titled “Broken,” which was featured at the Box Factory for the Arts in St. Joseph last year.

Each drawing features a broken tree, and each was largely reimagined from the trees of a 115-acre forested campus of Ox-Bow School of Art near Saugatuck, Michigan.

Whereas his mill paintings may invoke a nostalgic or historic understanding through their near-exact representation, Baker said his charcoal paintings are a bit more imaginative, poetic and surreal.

Baker said both charcoal and watercolor drawings may have different subjects, but they are drawn together by their Michigan roots — their quiet, intimate, even reverent moods — and their greyscale approach.

In the show room next to Baker’s are works created under a theme that matches their exhibit name: “Lost and Found.”

The works within were created by members of Northern Indiana Artists, a group of regional artists that promote contemporary art.

Works based in mediums such as acrylic, oil, pastel, photography, printmaking and watercolor are all shown. Exhibit chair Kimerbly DeNolf said Northern Indiana Artists is different than many other artist groups, which focus on a single or a small set of mediums.

She said that helps create both an engaging exhibit and theme.

“In a solo show, or even a show that has the same medium, you will get a lot of like pieces, or pieces [where] you see a theme,” she said. “Even though this is a theme, you see that the artists have so many interpretations of that theme, and the way they use their medium, they use that in their narrative.”

The meaning of “Lost and Found” was left open-ended, so artists featured made the most of it, DeNolf said.

Some focus on lost. Others focus on found. Some are serious. Others are satirical.

“You walk around, and you look and see how you would put that own narrative into your lost and found theme,” she said. “It’s interesting.”

Viewers will notice that six of the 36 pieces of art have special recognition. That is because they received either a medium award or a juror award from Wilborn.

Both Northern Indiana Artists’ and Baker’s works are available for purchase.

Prospective attendees are able to view the works outside of the reception during the Buchanan Art Center’s regular business hours, 10 a.m. to 5 p.m. Monday to Friday and 10 a.m. to 2 p.m. on Saturday.

Area resident sentenced for going after girlfriend’s son with shovel

NILES — A Niles man who attacked his girlfriend’s son with a shovel was sentenced to probation and jail Monday... read more