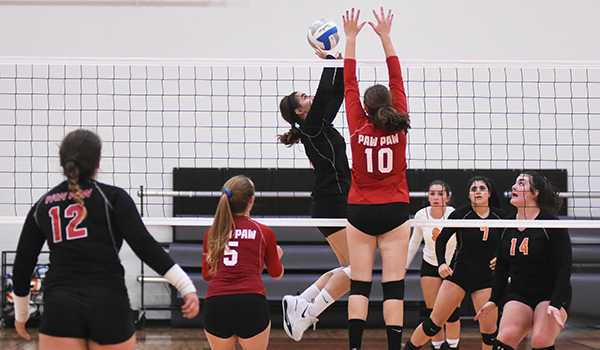 DOWAGIAC — The Dowagiac volleyball team did not have its “A” game against visiting Paw Paw Thursday night, but the Chieftains certainly earned and “A” for effort in rallying to win its Wolverine Conference match 3-2.

Dowagiac (9-5, 2-1 Wolverine) seemed to start slowly in all five sets, but were somehow able to stay in them until it could build some momentum.

“What a battle,” said Dowagiac coach Tony Hooley. “It was a very stressful match and I couldn’t be prouder how the ladies handled that pressure and never gave up, including doing down by five or six points in the middle of the short fifth set. I don’t think we had a lead until the 12th or 13th points.”

One of the biggest reasons why Dowagiac was able to pull out the victory was the play of senior transfer student Nicole Whan, especially in the second set with the match hanging in the balance.

Whan, who is the daughter of Dowagiac’s new superintendent Jonathan Whan, was a one-person wrecking crew in the third set as she delivered sets, dug up balls and recorded most of her team-high 11 kills.

“We didn’t get in our own heads,” Whan said about why they were able to pull out the win. “We wanted it more, and even when two teams are evenly matched like we were, that is all that really matters, who wants it more.”

Whan said that she felt the need to try and take over the match as her team was struggling offensively.

“I try my best to get the ball to our hitters because that is my job,” she said. “But when we need it and when our offense isn’t working, which happens, I try to get it a break by getting a couple of kills myself. Once that happens they get excited and they get back in the game again.”

Hooley was also impressed with is setter’s performance.

“Nicole Whan had another tremendous night,” he said. “She covers the court and puts the ball in hittable places like no other setter I have seen. She put the team on her back and forced a win in the second set. Without that effort who knows what the outcome could have been.”

Whan also had 13 digs, four blocks and 43 assists on the night.

Dowagiac also got 10 kills from Riley Stack and nine kills from Allie Conner, who tied Whan for the team lead with 13 digs.

Jenna Davis, despite playing with an injured hand, had seven kills, five aces and three digs. Megan Davis and Anna Dobberstein had 11 digs each, while Madison Potter led the team in blocks with six.

Dowagiac heads to Portage Northern for an invitational on Saturday.

NILES — Brandywine soccer proved the age-old theory true — that no lead is a safe lead in the game... read more