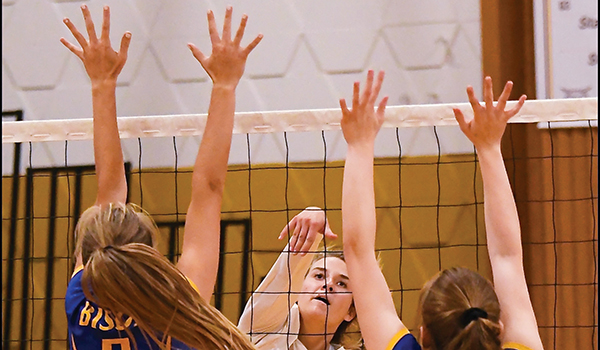 Niles and Buchanan dropped division decisions to hosts Lakeshore and Bridgman, while Brandywine picked up a BCS Athletic Conference win on the road against Comstock.

The SMAC West Division match between the Vikings and the Lancers, who have a new coach in Sarah Strefling, as the final score indicates according to Niles coach Jenny Nate.

“We played point for point every set but just couldn’t quite finish,” she said. “It was an exciting match, and I’m pleased with how scrappy we were. We had great energy and hustle. We have to make sure we always stay aggressive offensively and will continue working on that focus.”

Strefling, a former Lancer standout, took over the Lakeshore program after spending a couple of years at Edwardsburg, where she was 1-1 against the Vikings in the state tournament.

Senior Brianca Pickens led the team with 13 points and four aces, as well as tied for the lead in digs with Cadence Knight with 13.

The visiting Bobcats made short work of Comstock, which was no match for Brandywine at the net.

Bethany Duval returned to the lineup after missing a tournament and the Bobcats’ BCS match against Berrien Springs last week. Duval was out with an ankle injury. She had 11 kills and three aces.

Kylie Myers also had 11 kills to go with a pair of blocks. Haley Scott finished with six kills and two blocks, while Kristen Alvord had three aces and three kills.

The Bucks were also in Bridgman for a BCS Athletic Conference soccer match Wednesday night.

The host Bees outscored the Bucks 6-1 in the second half to pick up the 8-2 victory.

Irvin Cruz scored both goals for Buchanan. Logan Grwinski had an assist.

Jensen Ruelle and Zach Young combined to make six saves for the Bucks.