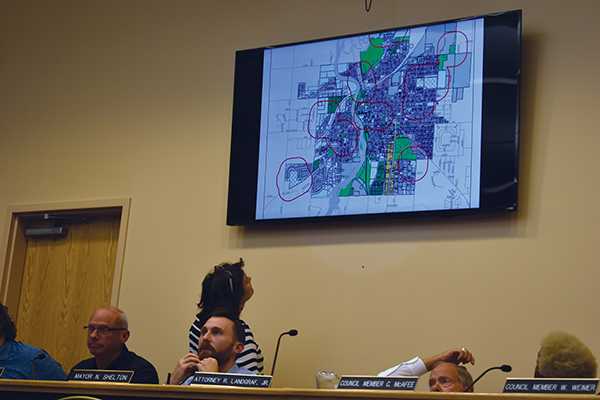 NILES — Niles City Council is preparing to vote on whether to allow recreational marijuana businesses within city limits, and a committee of the whole meeting Monday brought about discussions of different marijuana establishments.

A zoning ordinance recommendation and an opt-in ordinance regarding such businesses are slated to be voted on by Nov. 1. The committee of the whole meeting at the Niles Fire Department Complex at 1345 E. Main was hosted to discuss and adjust the two ordinance drafts.

The bulk of the two-hour public meeting was focused on designated consumption centers, which are establishments where people could go to use marijuana products they had purchased at other businesses or had personally grown and made.

The centers were not one of the five types of recreational marijuana establishments approved by Michigan voters in 2018. Instead, the establishment type became legal in Michigan through emergency rules established by the Department of Licensing and Regulatory Affairs July 3.

The council did not officially vote to allow consumption centers, but instead unofficially voted to give City Administrator Ric Huff and city staff recommendations for the final draft of the two marijuana ordinances.

Six members voted to recommend the addition of consumption centers in the ordinance. Daniel VandenHeede and Georgia Boggs opposed them.

Then, through multiple unofficial votes and discussion, Mayor Nick Shelton made the recommendation to include three at-large consumption centers to be included in the draft opt-in ordinance.

“Let somebody else be the guinea pig, and maybe we can figure ways to deal with these potential problems, and we’ll feel more comfortable with it,” VandenHeede said.

VandenHeede said he was worried about people driving to the centers, then leaving impaired. He said impaired drivers could increase if people from Indiana, where recreational marijuana is illegal, drove up to Niles to use the centers.

Others thought where the centers could be placed mattered.

Councilmember Gretchen Bertschy wanted to ensure that at least one consumption center was in each ward so low-income renters whose property owners restricted drug use could access the facilities.

“If there isn’t a [consumption center], they don’t have the ability to enjoy the same circumstances that someone whose income isn’t impaired does,” she said. “I don’t want to be discriminatory against those individuals.”

“If people want to access them, they’ll find a way there,” he said.

The council collectively approved of other consumption center regulations proposed in the draft ordinances.

Like other recreational marijuana establishments, the consumption centers would have to be 1,000 feet away from libraries, schools and publicly funded preschools.

Each would require a special land use permit, which must be approved by the planning commission and city council. The owners could only build on districts designated as simple business, office commercial, regional commercial and industrial.

Huff said the two zoning restrictions would limit the centers to a few plots of land across the city. Some of the four wards would only have a space or two to build the facilities.

Food and drinks other than alcohol could be served at the centers, which would permit some restaurants to have reserved consumption areas. No paraphernalia could be sold, however.

All centers would have to prevent odors from going off property and hide their presences. Outdoor space could only be allowed with council approval.

At least one security guard would need to be on the center’s premises when it is open.

The following rules applicable to all recreational marijuana establishments could also end up in the final draft of the two ordinances:

• Business operation could exist between 7 a.m. and midnight.

• No drive-through services would be allowed.

• No outdoor space would be allowed without council approval.

• Each establishment would be inspected prior to opening. Post-opening inspections would be unannounced.

Huff noted that many inspections would be complaint driven.

• Provisional licenses to recreational marijuana business owners could be revoked if substantial progress is not being made.

• Licenses must be renewed each year.

• Excess growing operations would be limited to the Niles Industrial Park the site of the former Simplicity Pattern Company at 901 Wayne St.

Excess growing operations are businesses that have more than five Class C licenses in any one location. Each Class C license permits 1,500 plants to be grown at one time.

• Events that sold or gave marijuana products could be permitted with council approval.