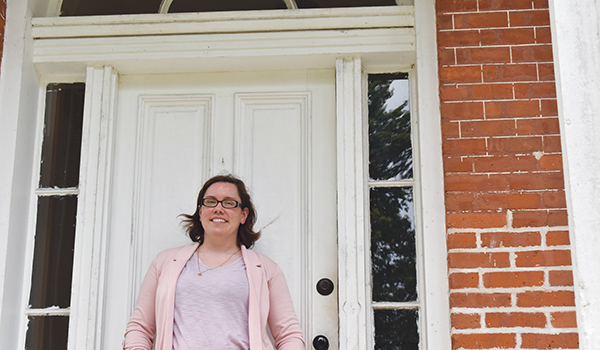 BERRIEN SPRINGS — On Monday morning, Rhiannon Cizon finished guiding the attendees of a scheduled meeting around Berrien Springs’ 1839 courthouse at Courthouse Square before beginning another. The courthouse is closed to the public on Mondays, but Cizon made sure her guests understood the history of the building they met in.

Cizon is the new director of the Berrien County Historical Association, a county-funded organization that not only manages the five historic buildings and grounds of Courthouse Square in Berrien Springs, but tells the county’s history at a macro level.

Sept. 14 will be her one-month anniversary on the job.

Cizon said she is taking a Marie Kondo approach to her new role.

The famed organizer emphasizes the joy that organizing sparks. Cizon wants to reorganize the structure and programming of the association in such a way that it sparks ideas in its guests and attendees.

A core way that Cizon hopes to accomplish this is by bringing out all the stories in Berrien County’s history at Courthouse Square, located near the county’s center.

“We cannot call ourselves county history if we’re not making sure we’re telling as many stories of our county as possible,” she said. “If I’m doing one particular type of history or one particular type of story, then I am doing it at the expense of others. Everyone deserves to see themselves represented in the stories here.”

That diversity of history extends to the county’s plethora of racial, ethnic, religious, gender and age groups, each of which has its own deep roots in the area, she said. Programming should tell different histories while appealing to different interests.

Cizon said she has plenty of ideas when it comes to sparking ideas and telling a full history. Her office is dotted with large sticky notepads, each detailing an idea of her own or one posed by a community member.

“I have to remind myself that Rome wasn’t built in a day,” she said. “I don’t have to have all the answers today.”

Despite her large quantity of ideas, Cizon does have specific goals she wants to implement.

Many are oriented toward programming, a field of work Cizon has spent most of her 15 years in. She has taken her history and fashion design degrees to six states to work in community history at museums and nonprofits.

One goal of Cizon’s is to make Courthouse Square a hub for engaging activities for residents of the Berrien Springs area.

“We can at least provide immediate answers to our community members while supporting the rest of Berrien County and its mission for history,” she said.

Cizon recalled this summer’s old-fashioned July 4 celebration, which drew 900 attendees to Courthouse Square in a village of under 2,000 people.

“From a community, when you drive by, there’s nothing welcoming about the property,” she said. “So, the idea is to change that.”

By utilizing the property and engaging the community more, diverse programming will arise, which will lead to residents around and beyond Berrien County coming to Courthouse Square to learn about the area’s history, she said.

For example, as the U.S. approaches the 100th anniversary of the 10th Amendment, Cizon said one of the monthly events’ topics could be about on Berrien County’s suffragettes. Another event could be about Juneteenth, an event that celebrates the abolition of slavery by law.

A second programming change could be creating a Sunday merienda, a light afternoon meal found in some regions of Central America and Europe. Cizon is familiar with a Mexican tradition of it, which features tea and music in a social setting.

Cizon would use a merienda to bring out the array of music from an array of area traditions.

For example, Cizon said that February’s merienda could be centered on love. She could ask local churches — such as a Korean, Chinese, Haitian, Spanish or Seventh Day Adventist church — to play music about love at the meal.

“It gives those groups a great chance to show their heritage and history,” she said.

Cizon also has plans to structurally change the square’s courthouse, a space that some of the programs would take place in. That would mean updating its exhibits and gift shop, both of which place a strong emphasis on military history.

While programming is a point of focus for the new director, Cizon also wants to focus on making connections with other history centers in Berrien County, such as the Niles History Center. While the Berrien County Historical Association seeks to tell countywide stories, these history centers seek to tell hyperlocal stories.

“Their mission is our mission,” Cizon said. “We have a larger constituency, because we are the whole county, but the least we can do is support our partners in a historical sense.”

Support could come in the form of promoting events and partnering for joint programming.

Cizon said she is always accepting ideas to make the Berrien County Historical Association better. People can share theirs by calling the association at (269) 471-1202 or visiting it at 313 N. Cass St. in Berrien Springs during its business hours.