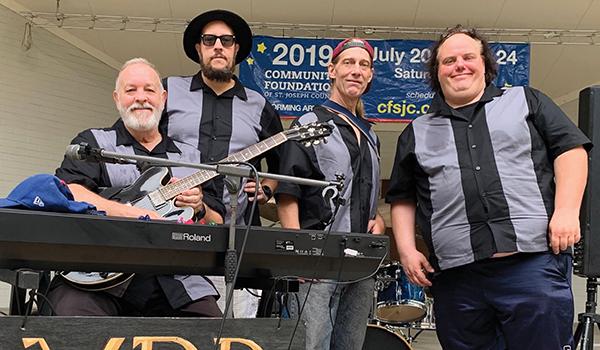 Classic rock band Van Dyke Revue will take the amphitheater stage in the city where it was founded at 6 p.m. while the Niles Art Association will host an informational booth below them.

Aside from both groups having roots in Niles, personal connections exist between band members and association members.

He created the wooden great blue heron sculpture that is in the Niles District Library, where association meetings are hosted the first Tuesday of each month at 7 p.m.

His sister is a painter. His son, Dave Van Dyke, plays in the band with him.

Community artists like John show off their artwork at each association meeting or host a presentation about the works they create, said Sandy Whitmeyer, Niles Art Association president.

“We try to get people to do programs that are all different types of art, whether it’s jewelry making or photography,” she said.

“We give a small amount of money to the Niles and Brandywine art teachers so they can buy supplies,” Whitmeyer said.

Niles residents and visitors may have noticed the Niles Art Association’s public presence, too. The group regularly decorates the downtown with art based on seasons, such as butterfly paintings in summer, tree slices shaped like pumpkins in fall and wooden snowmen in winter.

Near the winter holiday season, members will decorate rooms in the Niles History Center’s Chapin Mansion for its tours and events.

During Thursday’s concert, members of the Niles Art Association will accept donations for its school supply program and inform people about its events.

“We have a lot of fun at these meetings,” Whitmeyer said. “It’s really more of a social club.”

Meanwhile, John and his three bandmates will play the music of Roy Orbison, Roger Miller, the Beatles, Robert Johnson and Tom Petty. The group may even play a few originals, Dave — guitarist, harmonic player and singer — said.

Despite being around for two decades, the southwest Michigan band’s members still enjoy playing in Niles.

The band tends to play 50 to 60 gigs each summer, and this year is no exception, Dave said. They especially enjoy playing at community events like the Niles Summer Concert Series.

“People aren’t getting drunk and are just listening off to the left,” he said. “They’re kind of critical. We like feeding off of the attention there.”

Dave has found that the audience reacts best when the Van Dyke Revue’s four members sing acapella or break out into danceable hits, like “Brown Eyed Girl” by Van Morrison or “Blue Bayou” by Roy Orbison.