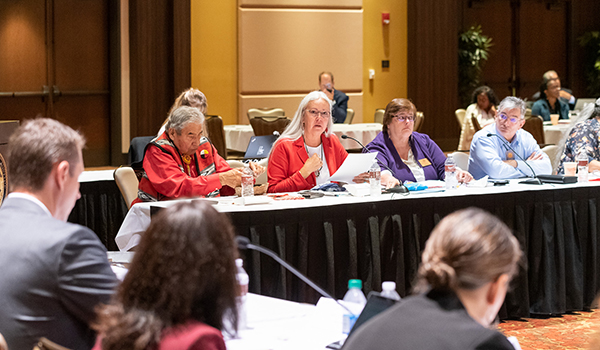 NEW BUFFALO — Last week, the Pokagon Band of Potawatomi Indians met with government officials and fellow tribes to address the problem of violence against indigenous and tribal women.

Hosted for the first time in the Midwest, the conference solicits recommendations from tribal leaders on enhancing safety and strengthening federal law enforcement efforts to the crimes of domestic violence, dating violence, sexual assault, stalking and sex trafficking of American Indian and Alaska Native women, and administering funds and programs for tribal governments established by Violence Against Women Act and subsequent legislation. Federally-recognized Indian tribes, along with officials from the U.S. Departments of Justice, Health and Human Services, and Interior attended the two-day event.

“This is a way for tribal leaders to sit down with government officials face-to-face to talk about their needs and their wants in their communities,” said Pokagon Tribal Council Member at Large Andy Jackson. “Many tribal leaders cannot attend because they live in desolate areas, so this is our chance to speak for the ones that can’t be there and speak for the ones that are there.”

Domestic violence and sexual assault disproportionately affect native women, with four out of five American Indian and Alaska Native women reporting that they have experienced abuse, and more than 50 percent have experienced sexual violence, according to the Indian Law Resource Center. This gives indigenous women the highest rates of reported sexual and domestic assault in the U.S. — up to 10 times the national average.

“This is a horrible, massive problem that is ignored,” Jackson said. “If this were your daughter, your sister, your auntie, you would care. … We want to raise awareness.”

One of the main topics discussed at the conference, according to Jackson and Curran, was federal grant funding for domestic violence resources and programming. Many tribal leaders discussed that due to the location and resources of many American tribes, tribal leaders have difficulties meeting requirements for many federal grants allocated for domestic violence intervention. Jackson and Pokagon Tribal Council Secretary Kelly Curran said the tribes in attendance worked together to convey what could be done to help make federal grants more accessible to Native American governments.

“So many [tribes] do not have the resources to deal with this,” Curran said. “These people are in dire need of these things, and they are being forgotten. … We all need to work together to make sure that we are finding a solution.”

Both Jackson and Curran said they walked away from the conference hoping they had been heard and that the voices of those in attendance would make a difference. Going forward, Jackson and Curran said they would continue to advocate for native women and work to end the epidemic of domestic and sexual violence against them. They further encouraged the greater community to also support native women by becoming aware of the problem.

“We have to protect our women and our children,” Jackson said. “People need to know that their lives are important. Our community is important.  … It is our job to advocate always.”

BUCHANAN — On Tuesday, Aug. 27, the Buchanan Scarecrow Charities finished hanging up the scarecrows around town to get the... read more