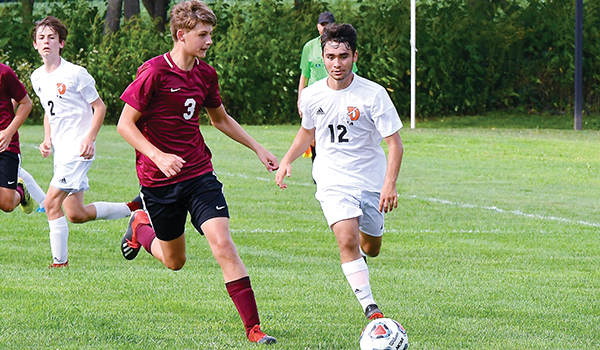 BUCHANAN — Fresh off its opening season victory over Niles on Monday, Dowagiac traveled to Buchanan to take on the Bucks in another non-conference contest and came away with a 9-0 win.

Dowagiac (2-0) wasted very little time getting on the scoreboard, as a Cole Weller found John Hassle in the second minute. Hassle’s shot was able to beat Buchanan goalkeeper Zach Young into the right side of the goal.

Cristian Wilson quickly added the Chieftains’ second goal of the game in the fifth minute after Young blocked a previous shot. The ball fell right at Wilson’s feet and he slotted the ball home for his third goal of the season.

Weller tallied the third Dowagiac goal in the ninth minute on an assist from Noah Green. Green added two more goals in the 15th and 22nd minutes on assists from Ben McCrorey and Weller, respectively.

With the score 7-0, Dowagiac Coach Mike Williams was able to move players around in different positions and further emphasize his game plan with the youth in his varsity squad.

“We really wanted to cross the ball a lot today,” Williams said. “Our goal was to work the ball to the middle of the field and pass it out wide in order to deliver good crosses into the box. This game allowed us to work on those fundamentals.”

Dowagiac’s anchor on defense, Adrian Lee, was able to move up to forward for the last 10 minutes of the game, scoring the finals two goals in the 34th and 36th minutes. Weller assisted both.

And while you won’t see his name on the scoresheet for this game, it was clear who the field general was for the Chieftains.

Isaac Saavedra is the holding midfielder for the Dowagiac squad, and it is his job to make sure that: 1) the ball doesn’t reach the defense, and 2) he generates the offense from the middle of the field. Many of Saavedra’s passes throughout the game resulted in the assists for his teammates.

“I just like distributing the ball,” Saavedra said. “Sometimes I try to help too much, and coach Williams gets on me. I really enjoy working with Jose Carrillo on the field, but overall I really like playing holding midfielder.”

With their head coach Russ Philip out sick and only fielding 11 players, Buchanan (0-2) still had a bright spot on the day in junior goalkeeper Young.

Young may have been barraged with 22 shots in the 40 minutes, but he was still able to save 13 of them and even took some shots from very close range.

Dowagiac’s next games will be at the Westside Shootout in Kalamazoo on Saturday.

Buchanan will next travel to Niles for the annual VanDenBerg Invitational with Brandywine, Cassopolis and Niles on Saturday.

The opening round games are scheduled for 10 a.m.

EAU CLAIRE — Protecting your home course is important if you want to win a Wolverine Conference golf championship. That... read more