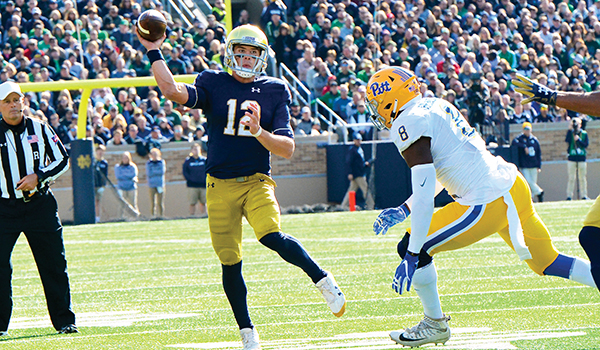 No quarterback controversy for the Fighting Irish entering 2019 season

NOTRE DAME — As Notre Dame football begins its preparation for the 2019 season, there is something different about the Fighting Irish as they enter preseason camp.

There is no quarterback controversy for head coach Brian Kelly and his staff. Ian Book is the Notre Dame starting quarterback, no ifs, ans or buts.

The 6-1, 208-pound senior signal-caller took over as the Fighting Irish starting quarterback during at Wake Forest in 2018. He finished the year 197-of-280 (70.4 percent) with 19 touchdowns. he rushed for another 250 yards on 78 carries and four touchdowns.

And despite being the first FBS quarterback to win his first five starts and throw for better than 70 percent since Russell Wilson did it for Wisconsin in 2011, there are still plenty of things he needs to improve on if Notre Dame is going to contend for the College Football Playoffs.

“I think just continue to work on his craft,” Kelly said. “I think he knows the little things he can be better at. We’ve addressed them internally about those things, but I think he’s already begun, and that is to make others around him better players. I think what we’ve seen is a leader, and we’ve put him in a leadership position. He’s just doing such a great job leading. His presence is one where, when he asks some people to do things, they’re doing it. The respect that he has is different than last year.”

Kelly has also noted that Book is more confident going into this season knowing he is the starting quarterback.

“You know, he didn’t start the year as our starting quarterback, so there’s just a different,” he said. “He walks around the building a little different, great confidence in him. But he knows the technical things he needs to work on. I think Tommy Rees has done a great job laying those things out. He’s worked on them. I think we’ll continue to work on them.”

Kelly is hoping his entire offense improves right along with Book. He knows that it will take a team effort on that side of the football to get the job done.

“I hope there’s ten guys that can impact our football team,” he said. “Look, there’s certainly a number of players, but I think you always look toward your veterans. Chase Claypool is going to be a guy that I think is going to make a huge impact on our football team. Cole Kmet, Brock Wright. I think there’s a number of guys who are poised to really have an impactful season.”

Defensively, Kelly thinks that his linebacker group could open some eyes.

“The linebacker position is going to be exciting,” he said. “We’ve got a lot of good players there that have to be able to show themselves and have some production. Again, we’re going to put them in a number of positions to do so, so that will be one that requires a lot of attention, but one that we’re looking forward to.”

Some of the people to watch are Drew White and J.D. Bertand, although Kelly said until he sees them play with pads on, he does not never really know anything.

“I guess Drew White would definitely be in that mix,” he said. J.D. Bertrand is physically able to be thrown into that mix as well. He’s shown himself physically to be one of those guys, but we’ve got to go see him with the pads on. So, if you want to pencil him in as another add to that mix, and then everybody that was competing in the spring.”

Special teams will also be a priority for Notre Dame in fall camp having to replace punter Tyler Newsome and placekicker Justin Yoon.

“Well, it’s been an ongoing process, so it’s not something that obviously we’re just kind of dealing with in preseason camp,” Kelly said. “Jonathan Doerer has had a really good buildup, and we have seen the kind of confidence buildup that’s necessary to feel confident moving into camp. Now, he’s going to get a lot of work. We’re going to put him in a lot of situations. This is not a guy that has the veteran presence of the all-time leading kicker here at Notre Dame that Justin Yoon had. So, we have to do some things in our practice schedule to put him in those situations.”

Notre Dame opens its 2019 season Sept. 2 on the road at Louisville before hosting New Mexico on Sept. 14. The following week, Sept. 21, the Fighting Irish head to Athens, Georgia to take on Georgia.

Edwardsburg’s Cameron Ekanayake, who played quarterback for the Eddies in 2016, is listed as a running back on the Notre Dame roster. Ekanayake, a junior, was a walk-on at Notre Dame last year. He did not see any game action, but worked on the Fighting Irish offensive scout team.

ROSEMONT, Ill. — Tickets for the 2019 Big Ten Football Championship Game presented by Discover are now on sale. The... read more